Every new NFL technology must integrate smoothly with what is already in place. A perfect example: placing cameras in the end zone pylons.

Two of the league’s broadcast partners — ESPN and CBS — are experimenting with placing cameras in pylons for select Thursday and Monday night games in 2015. The project is still in the research and development phase and it’s up to the home team’s discretion to allow the networks to use the cameras in their stadiums.

Testing of the cameras has been ongoing for several seasons, but the technology was unable to meet the league’s requirements for the safety of players and officials, and the NFL’s standards for certifying playing fields. For example, both ESPN and CBS presented hard-wired versions this offseason, but each required a metal plate to be buried under the pylons.

The plate created a hard spot on the field that did not meet the NFL’s standards for certifying playing fields, and the league was concerned the plate may dislodge and injure a player or official. In addition, there was no easy way to bury the plate in domed stadiums with concrete floors.

The NFL, ESPN and CBS worked with groundskeepers from Atlanta, Cincinnati, Indianapolis, Jacksonville and Tampa Bay. They devised a way to place the transmitter in a recessed area in the pylon and connect it by wires to a device safely located off the field of play.

The pylons with cameras collapse and dislodge, and the wires disconnect when a player strikes them, just like non-wired pylons. A video technician can reattach the wires during a stoppage in play if they become disconnected.

The new angles mostly enhance the viewer’s experience, but are unlikely to be the panacea some want in the instant replay process. While a player’s feet may be shown or if the football crossed the goal line, the pylons may not do both at the same time, which is what is required in the replay process.

The challenge for NFL Football Operations with pylon cameras is the same with all new technologies, balancing innovation with the game’s traditions, integrity and competitive equity. 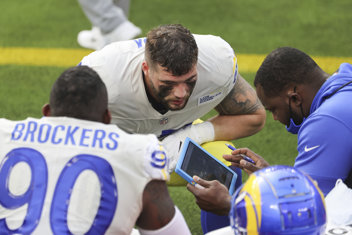