In 2018, the NFL introduced the Regional Combine Invitational, a two-day event that brings together NFL talent evaluators and players looking to showcase their abilities. The 2019 Invitational took place on March 9 in Kansas City, MO.

Similar to the National Invitational Combine held in Indianapolis in February, prospects participate in physical, mental and medical assessments and have their talents evaluated by pro scouts.

The event focuses on the top draft-eligible college players who did not receive an invitation to the Combine in Indianapolis. The prospects — identified by NFL teams and the league’s scouting services — are assessed by pro scouts from all 32 clubs in one location.

Participants must be draft-eligible for the upcoming NFL Draft, have played college football last year and have used all of their NCAA college eligibility.

By restricting the participants to college prospects eligible for the current NFL Draft, teams can focus only on players who could end up on their draft board.

The Regional Combine Invitational provides an opportunity for the league to test new innovations that may assist pro scouts with evaluating prospects.

Fusion Sport’s SMARTSPEED timing system electronically times the 40-yard dash and short shuttle drill. SMARTSPEED uses Fusion Sport’s Error Correction Processing to eliminate errors caused by hands, feet and other equipment. These timing errors can affect the accuracy of the results. In prior events, the times were tracked by hand. At this event, the times are measured and distributed electronically by the Fusion Sport system.

In 2019, the NFL used Fusion Sport's SMARTABASE Human Performance Platform to create the Regional Combine Invitational Platform, which helps teams and scouts to view, interact with and visualize drill results.

Wilson X Pro footballs will be used to quantify what was previously measured by the “eye test.” The X Pro measures timing (how long it takes from the snap to release, snap to catch attempt and the time from breaking the hands to release), quality of throws (how fast the ball spins and tightness of the spiral), and arm strength (number of throws and peak velocity). The data evaluate arm health, arm talent and the elements of successful pass plays.

Bringing Clubs and Prospects Together

The Regional Combine Invitational benefits all participants. Pro scouts from NFL teams can gather information on the prospects in one location; and the players can continue to pursue their NFL dream, show off their skills and try to catch on to an NFL roster.

The night before displaying their on-field skills, each group meets to set the table for their experience. NFL Legend Will Shields will address each group, share his combine experience and answer questions the prospects may have. Shields is an NFL Legends Mentor and assists in preparing prospects for their transition to the NFL. Scouts also can interview the prospects one-on-one.

Also on the night before the physical drills, the prospects take the same aptitude test as the one administered at the Indianapolis Combine. Since 2013, the prospects have taken the NFL Player Assessment Test, which measures competencies that contribute to success in the NFL, including intelligence and personality traits, and had their results shared with all 32 teams. The NFL-PAT test scores significantly correlate with player performance outcomes, and standardize the way that intelligence and personality traits — non-physical, yet football-related characteristics — are measured and combined with physical traits to better predict player performance.

The Regional Combine Invitational is another example of NFL Football Operations’ commitment to exploring ways to enhance player evaluation for NFL teams and giving every deserving player the opportunity to have his talent assessed by pro scouts. 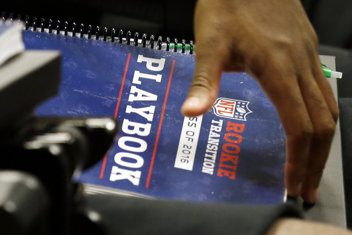