The NFL is committed to protecting its players from unnecessary risk, while keeping the game fair, competitive and exciting.

The NFL Competition Committee receives and considers input from coaches, general managers, owners, current players and NFL Legends, the NFL Players Association, medical personnel and the media, and conducts hours of discussion and film study before recommending changes to any rule.

The league reviews changes with players, coaches and officials during training camp and the NFL Officiating Clinic to help everyone adapt to the rule changes and points of emphasis. The Officiating Department also provides training videos for players and coaches with specific examples.

Beginning in 2019, both offensive and defensive pass interference calls are reviewable. Plays can be reviewed whether the penalty was called on the field or not. This rule change is subject to a one-year trial period.

A pass interference ruling will be changed in replay only when there is clear and obvious visual evidence that the on-field ruling was incorrect. To change the ruling on the field, there must be clear and obvious evidence that contact “significantly hindered” or “did not significantly hinder” an opponent. See full details on the 2019 replay rule here.

Owners voted to expand protection of defenseless players by eliminating the blindside block. It is now prohibited for a blocker to initiate forcible contact with his head, shoulder or forearm when his path is toward or parallel to his own end line. The penalty for an illegal blindside block is a loss of 15 yards and an automatic first down.

Owners voted to make permanent the kickoff rules changes that were implemented in 2018. The restrictions resulted in a 35% decrease in concussions on kickoff plays when compared to the 2017 season.

Here are the NFL kickoff rules:

In addition to pass interference, owners voted to expand the number of plays subject to booth reviews to include:

Other rules changes for 2019 include:

Beginning in 2019, only players in uniform may enter the field to celebrate. If anyone other than a player in uniform enters the field, it is a penalty for unsportsmanlike conduct — loss of 15 yards and an automatic first down.

Owners voted to expand the authority of game officials to disqualify players for acts committed during a game. In 2018, designated members of the officiating team could disqualify a player for non-football acts (such as unsportsmanlike conduct) if a flag was thrown related to that act. In 2019, this will be expanded to also include any football act.

The offense may now apply any penalties committed by the defense to either the ensuing kickoff or to the succeeding extra point or two-point conversion plays.

The Officiating Department will continue to emphasize the Use of Helmet rule adopted in 2018.

Players can be ejected for Use of Helmet fouls — and all ejections will be reviewed by senior officials in Art McNally GameDay Central in New York. The standards for ejection are, if:

The Committee is in support of issuing warning letters for any Use of the Helmet fouls in the interior line or where there is little space between players.

Offensive holding will be more strictly enforced this season, particularly on the back side of the run play or line of scrimmage. Referees will closely monitor play at the line of scrimmage to ensure that offensive players do not materially restrict opponents or alter the defender’s path or angle of pursuit.

Material restrictions include but are not limited to: 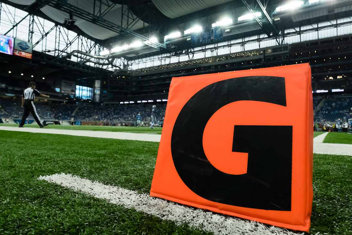