The year was 1973. The Miami Dolphins defeated the Washington Redskins in Super Bowl VII, capping a perfect season — an accomplishment unmatched to this day.

Gallup surveys showed, for the first time, that football surpassed baseball as the country’s most popular sport — a status that continues today, with more than 60 percent of people telling the polling company that they are fans of professional football.

History was also in the making off the field that year. That’s when the league teamed up with United Way, pledging to build stronger, healthier communities. Today, it’s the longest-running partnership between a major sports league and a nonprofit organization.

The NFL’s four decades of work with United Way is just one example of its commitment to public service. Here are other ways the league gives back to the broader community and to those who play, watch, participate in or just love football.

GIVING BACK TO COMMUNITIES AND INSTITUTIONS

The NFL Foundation, a nonprofit organization representing the 32 NFL teams, focuses on the issues most important to the game — youth football, protecting players, and community involvement. Since 1973, the foundation has contributed nearly $370 million to charities and youth football programs. 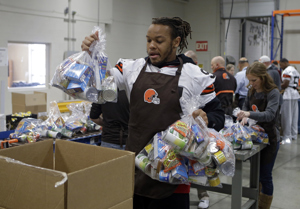 The Value of Football

The Value of Football

Football is inherently quantifiable: passing yards, rushing yards, carries, receptions, sacks, touchdowns, wins, losses. All can be counted, compared and analyzed. But the real value of football is far greater than its statistics.

The NFL makes a difference on and off the field. As the steward of a sport enjoyed by millions of fans, the NFL has a special responsibility to use its platform to promote causes that improve the health and well-being of its fans and players and the support the communities in which they live.

Football has the power to positively influence players and fans of all ages. While everyone’s connection with football is personal, most stories share common themes:

The NFL is committed to preserving these and many other qualities that make football great. And football gives back — the game, the league, its teams and its players all play important roles by raising money, giving their time and volunteering in their communities.

The NFL does this for its players and its fans, and to honor the proud legacy of a sport that has changed lives and created millions of fans and players around the globe. We do this for football, a sport with value beyond the numbers.

The NFL continues to make tremendous progress in its efforts to protect the players. Our collaborations on major research puts the NFL on a fast-track toward developing technologies that will benefit football players, the military and other members of our society

The NFL Foundation, a nonprofit organization representing the 32 NFL teams, focuses on the issues most important to the game — youth football, protecting players, and community involvement. Since 1973, the foundation has contributed more than $430 million to charities and youth football programs.

GIVING BACK TO CAUSES

The NFL Foundation raises millions more for prominent causes by lending its support to the nation’s most respected organizations, such as the American Cancer Society in the battle against breast cancer and Mothers Against Drunk Driving to prevent and end alcohol-impaired driving and related deaths. NFL and its teams each year salute the nation’s active-duty service members and veterans by raising millions of dollars for organizations that support them.

The league’s players and 32 teams provide additional resources through their own charitable foundations. NFL players also give back through volunteerism: During the season, many players spend their days off volunteering at local schools, shelters and hospitals and helping out in their communities in other ways.

GIVING BACK TO PLAYERS

Learn more about how the NFL takes care of its own:

NFL Player Engagement initiatives provide future and former players with career training, health and wellness support, and other resources. Player Engagement Prep stresses education, community service and leadership development to student-athletes in football and other sports to help them succeed on and off the field. NFL Player Engagement Next helps players prepare for their life away from the football field. Retired players can connect with peers and legends and get career training so they can transition into their next careers. They also learn ways to live well long after they leave the game.

And the NFL helps current and former players in times of need. The NFL Life Line gives any NFL players and their family members access to an independent crisis line for confidential assistance. NFL Total Wellness offers former players and their families a comprehensive set of services to stay healthy and live well — physically, emotionally and financially. Eligible players with certain medical or mental health conditions or at retirement age may be eligible for financial benefits, including monthly pensions.

These are just some of the ways the NFL is making a difference on and off the field. As steward of a sport watched and enjoyed by millions of people in America and around the world, the NFL has a special responsibility to further causes that contribute to the health and well-being of its fans and the community. The league looks forward to continuing this long tradition of public service for many years to come.