Thousands of football players suit up each year for colleges and universities coast to coast. Some take the field for the most storied teams in all of sports — amateur or professional — while others play for schools with lower profiles. Most players share one dream: making it to the NFL.

The NFL is committed to giving college players every chance to showcase their talents and make it to the highest level of football. The NFL and NCAA work closely to provide student-athletes with the opportunities and information they need to succeed on the field and remain eligible as they work toward that goal.

"Education is something we value at the NFL. We understand players are dreaming of playing on Sunday, Monday and Thursday. But we also know it may be a short-lived experience and that there's nothing more valuable than your education."

College prepares student-athletes for the realities of life — with or without football — and the NFL wants them to understand how important it is to stay in school and get their degree. To help them, the NFL works with with Game Plan to educate players as athletes and individuals.

The NFL also established the College Outreach Program and College Advisory Committee to ensure that players make the most of their opportunities to set themselves on the path to success in football and beyond.

The NFL College Outreach Program goes far beyond preparing players for the NFL — it establishes a high standard of excellence for players to pursue on the field and in their personal lives.

As a part of this program, former NFL players visit colleges and universities to have frank discussions with student-athletes about what to expect at the next level, how the NFL Draft process works and how to make informed decisions as underclassmen.

Former NFL stars like Hall of Famers Aeneas Williams and Cris Carter and Executive Vice President of Football Operations Troy Vincent drill home the importance of getting a college education from their personal perspective. They emphasize how hard it is to make it to the NFL and how short the typical playing career can be. Advice from former and current stars shows student-athletes the connection between success in school and success in life.

“By age 25, most NFL players will have no more economic use for the only skill they ever developed. An NFL career is a magic ticket for very few superstars.” — Troy Vincent, Executive Vice President of NFL Football Operations

To help underclassmen who are considering entering the NFL Draft, the league developed the College Advisory Committee, where NFL scouts project where a player will likely get drafted — if at all.

The board evaluates up to five underclassmen from each school, though evaluations for additional players are considered on a case-by-case basis. Limiting the number of players the committee evaluates allows the scouts to focus on those players with a realistic chance and provide more accurate projections.

The board’s assessments keep some players from making an ill-advised decision to leave college early. In most cases, student-athletes are encouraged to stay in school for another year to get their degrees and improve their draft stock. As more underclassmen declare for the draft, the advisory committee’s role becomes increasingly important. The total CAC players evaluated from 2012-2020 is roughly 1,782, the total CAC players declared is roughly 614, which brings the total percentage of players declared to 34.5%. That follows a three-year trend where more underclassmen enter the draft, and fewer get drafted.

TAKING THE NEXT STEP

The NFL’s player development process doesn’t end when a student-athlete's collegiate career comes to an end. Top prospects showcase their talents for scouts at events like the Senior Bowl, East-West Shrine Bowl, NFLPA Collegiate All-Star Game and the Regional and National Combines.

The NFL and the NCAA work closely to educate student-athletes. If a collegiate player has what it takes — the talent, the commitment, and the dedication — then the NFL will find them regardless of what level they are currently playing in college (FBS, FCS, DII, etc.) 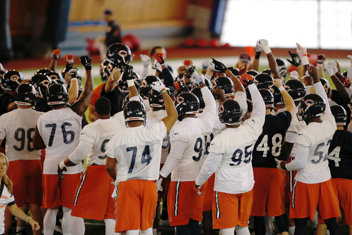