As first dates go, this one didn’t show much promise. But for television and the NFL, Oct. 22, 1939, marked the beginning of a long-term, symbiotic relationship that forever changed football — not just how the game is viewed, understood and marketed, but also how it’s played, operated and officiated.

Today, 16 million fans tune in for a typical regular-season game. NFL games dominate weekly television ratings each fall, and the league evenly divides the revenue from multibillion-dollar television contracts among all 32 clubs. Each game is a major production, with broadcasters deploying 12 to 20 cameras and 150 to 200 employees for regular-season contests.

In 1939, NBC was the first network to televise a pro football game, using two cameras and about eight staffers. Shortcomings in the available technology presented challenges for airing the contest between the Philadelphia Eagles and the Brooklyn Dodgers.

“It was late in October on a cloudy day, and when the sun crept behind the stadium there wasn’t enough light for the cameras. The picture would get darker and darker, and eventually it would be completely blank and we’d revert to a radio broadcast,” play-by-play announcer Allen “Skip” Walz recounted in Football Digest.

The network broadcast the game to the roughly 1,000 TV sets in New York City at the time and to displays in the RCA Pavilion at the New York World’s Fair. NBC continued to air games and — though football on TV wouldn’t fully take off for a few more years — the seed was planted.

Cumulatively, those events and others cemented the relationship. The impact on the league has been remarkable, in both obvious and subtle ways.

Televised games fueled the dramatic increase in the NFL’s popularity and profitability. Fans soon set aside time each week to watch their favorite teams play on Sundays. Games were eventually added to other days and moved to prime time. Television elevated the Super Bowl from sporting event to de facto national holiday: Super Bowl LVI, on Feb. 15, 2022, topped 112 million viewers. 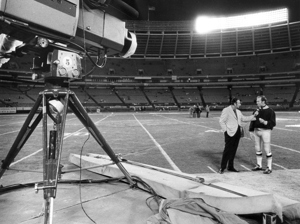 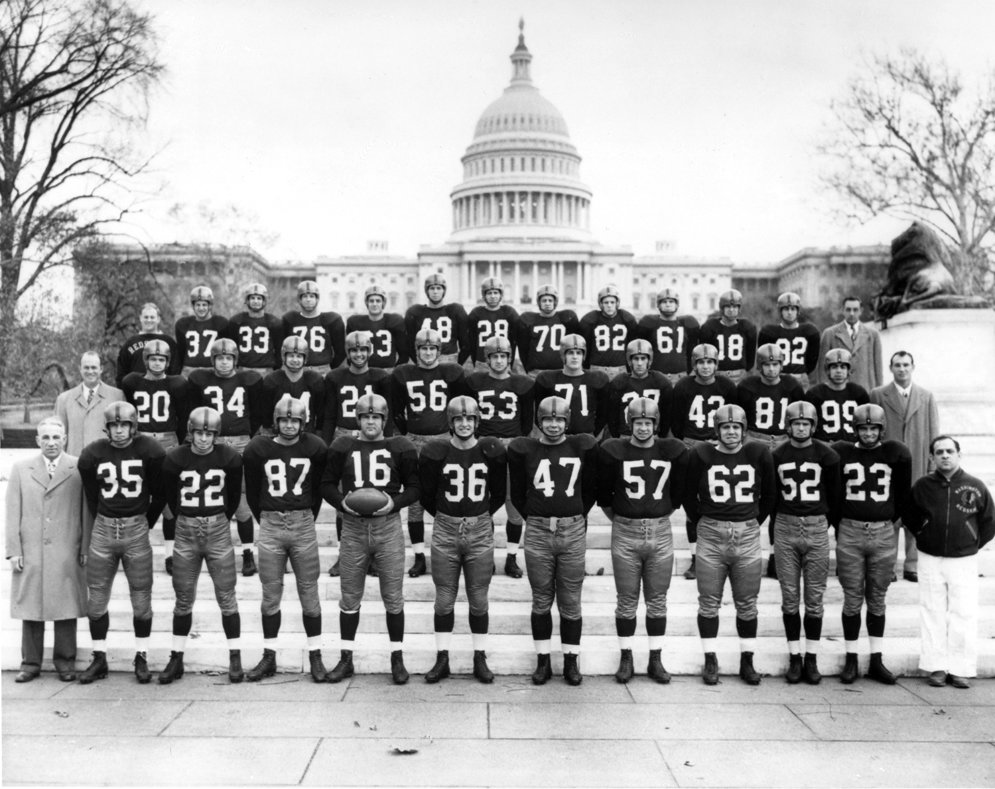 In 1950, the Washington Redskins and the Los Angeles Rams become the first teams to reach agreements to broadcast all home and away games, although the Rams reverted to televising only road games in 1951 after home attendance plummeted. (AP Photo/Pro Football Hall of Fame) 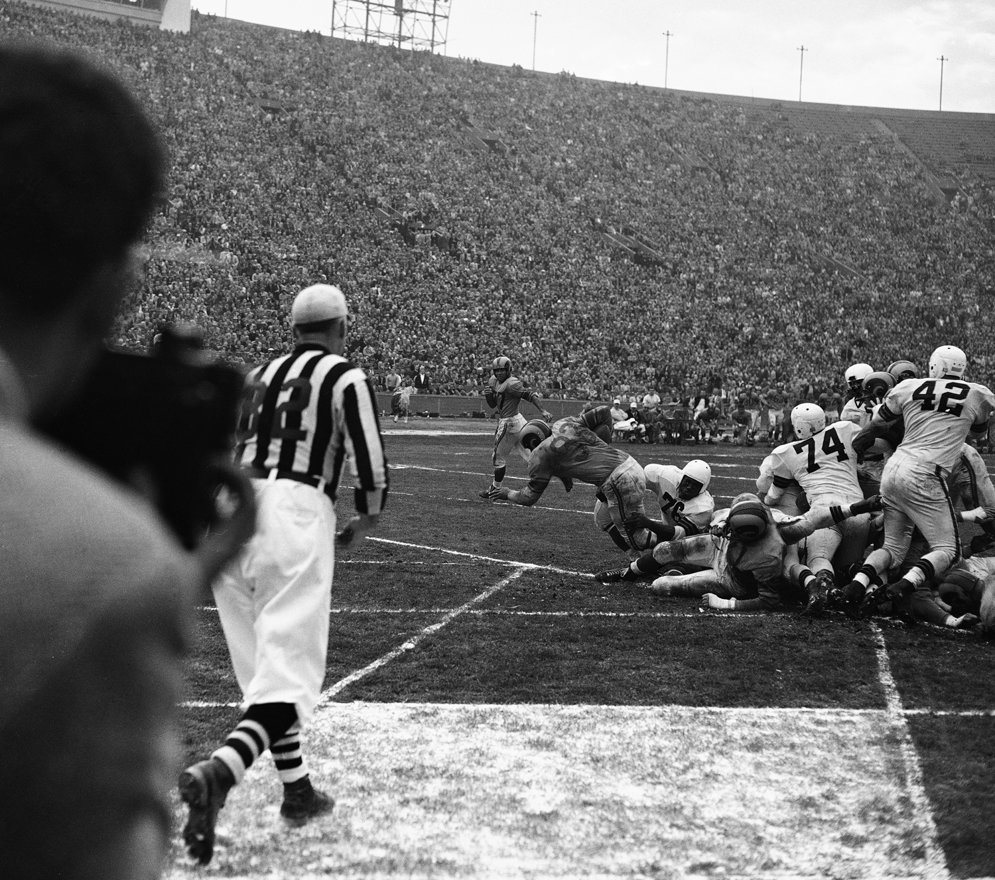 The 1951 NFL championship game is shown coast to coast for the first time — albeit with a blackout in the host city of Los Angeles — after the DuMont Television Network pays $75,000 for the rights. Viewers see the Los Angeles Rams defeat the Cleveland Browns 24-17. (AP Photo) 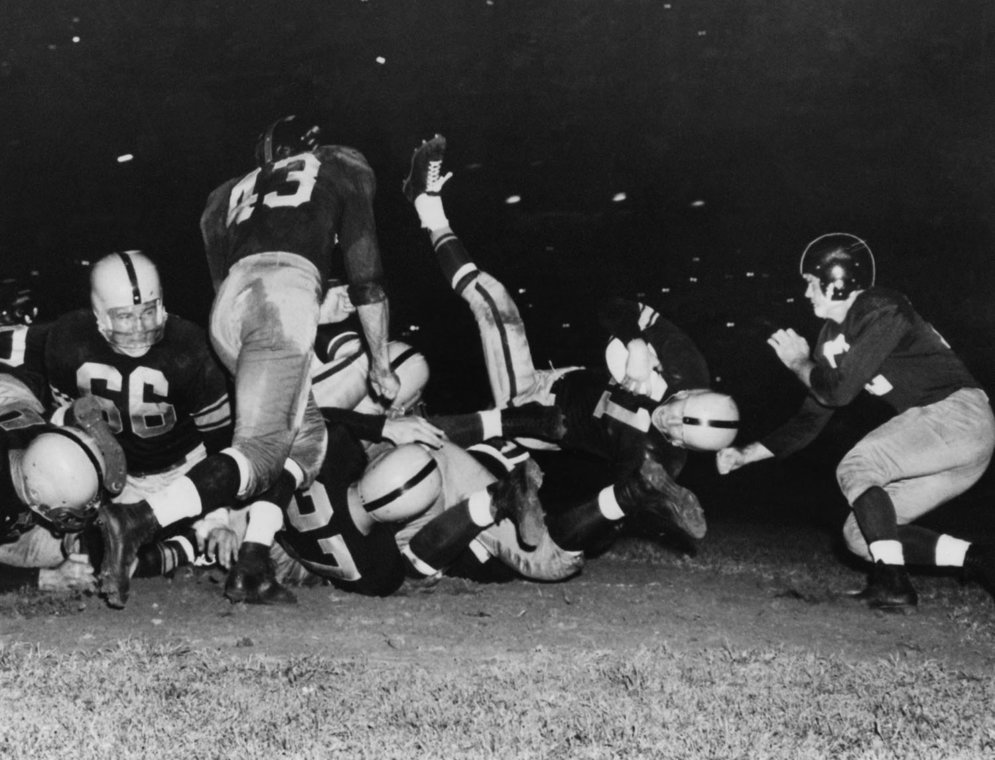 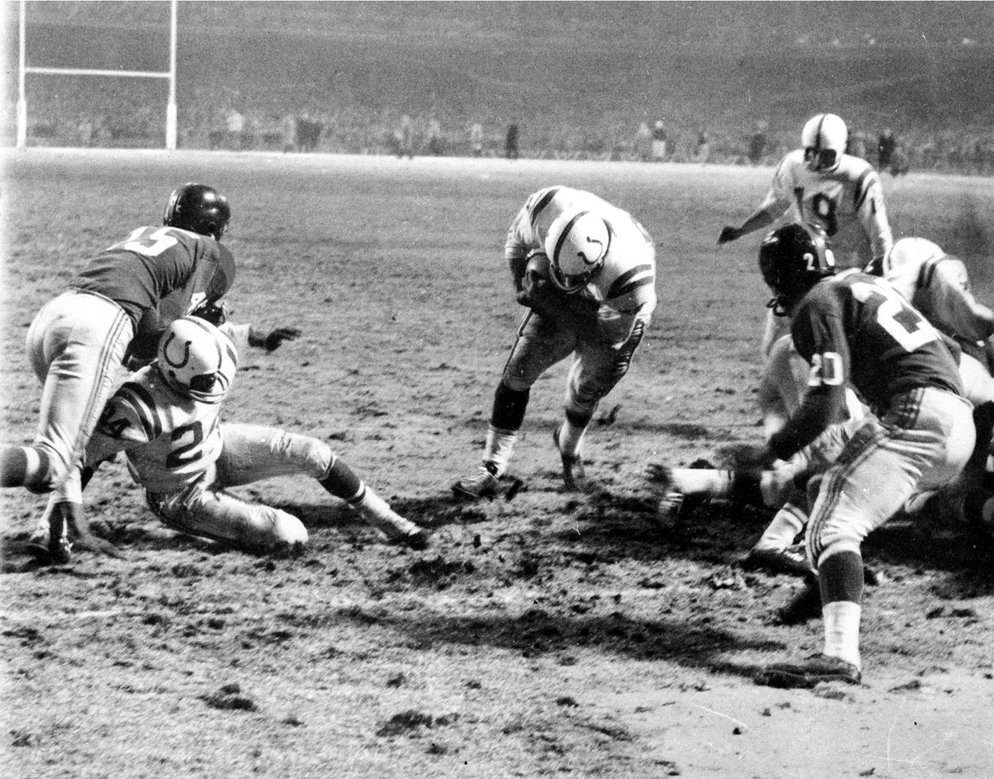 NBC televises the 1958 NFL championship game in which the Baltimore Colts defeat the New York Giants 23-17 in overtime. Proclaimed as “the greatest game ever played,” the nationally televised contest is seen by an estimated 45 million viewers and catapults the NFL to new levels of popularity. (AP Photo) 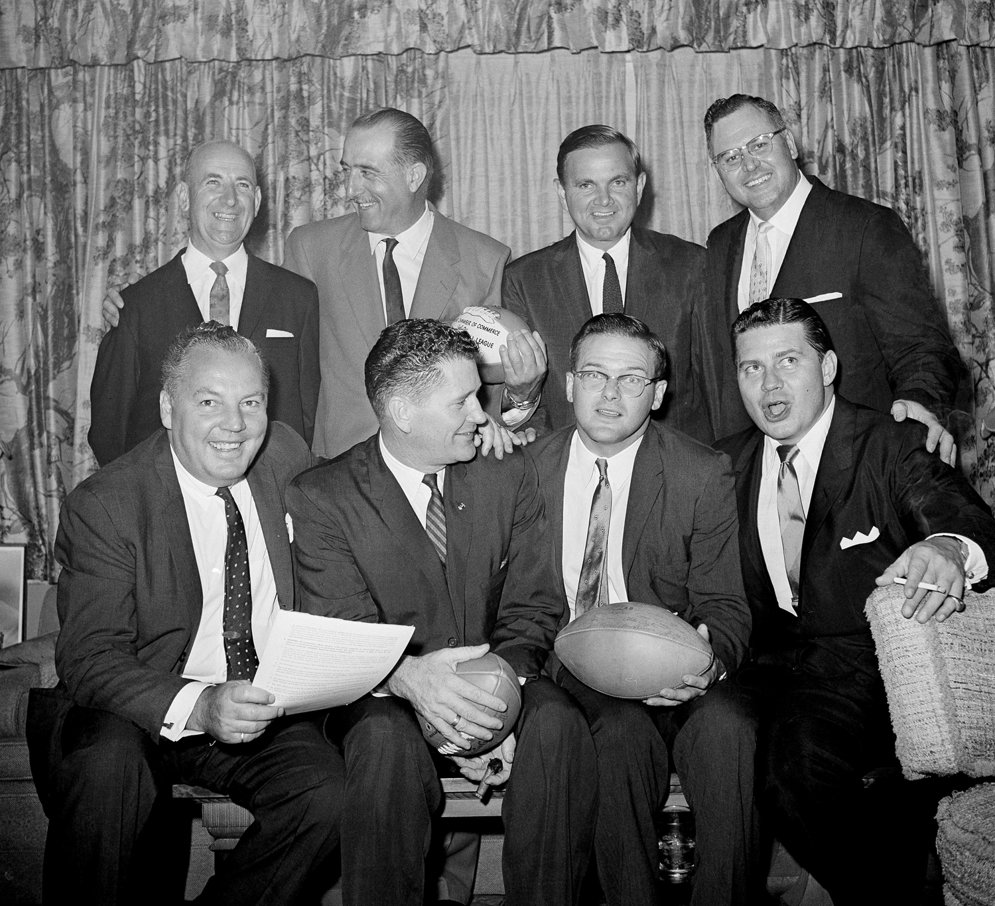 The newly formed American Football League signs a five-year, $10.6 million contract with ABC in 1960. TV contracts would keep the AFL viable until its merger with the NFL later in the decade. (AP Photo/Marty Lederhandler) 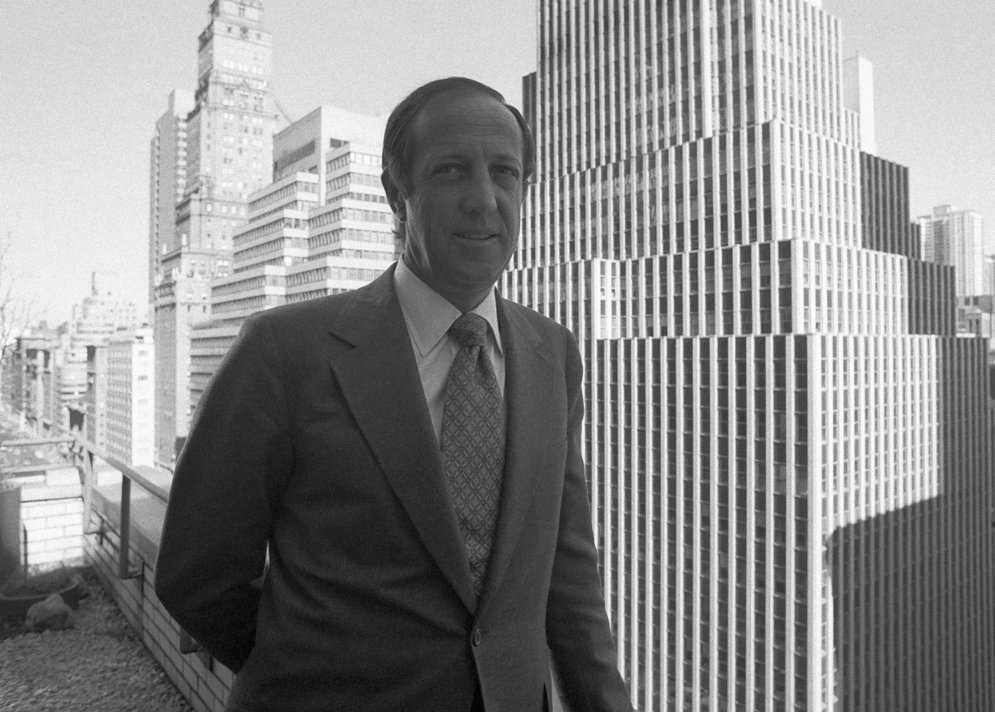 In 1960, NFL Commissioner Pete Rozelle moves league headquarters from a Philadelphia suburb to 1 Rockefeller Plaza in New York to help the league establish better ties to the television and advertising industries. The league offices remain in New York to this day, although now at 345 Park Ave. (AP Photo/Ron Frehm) 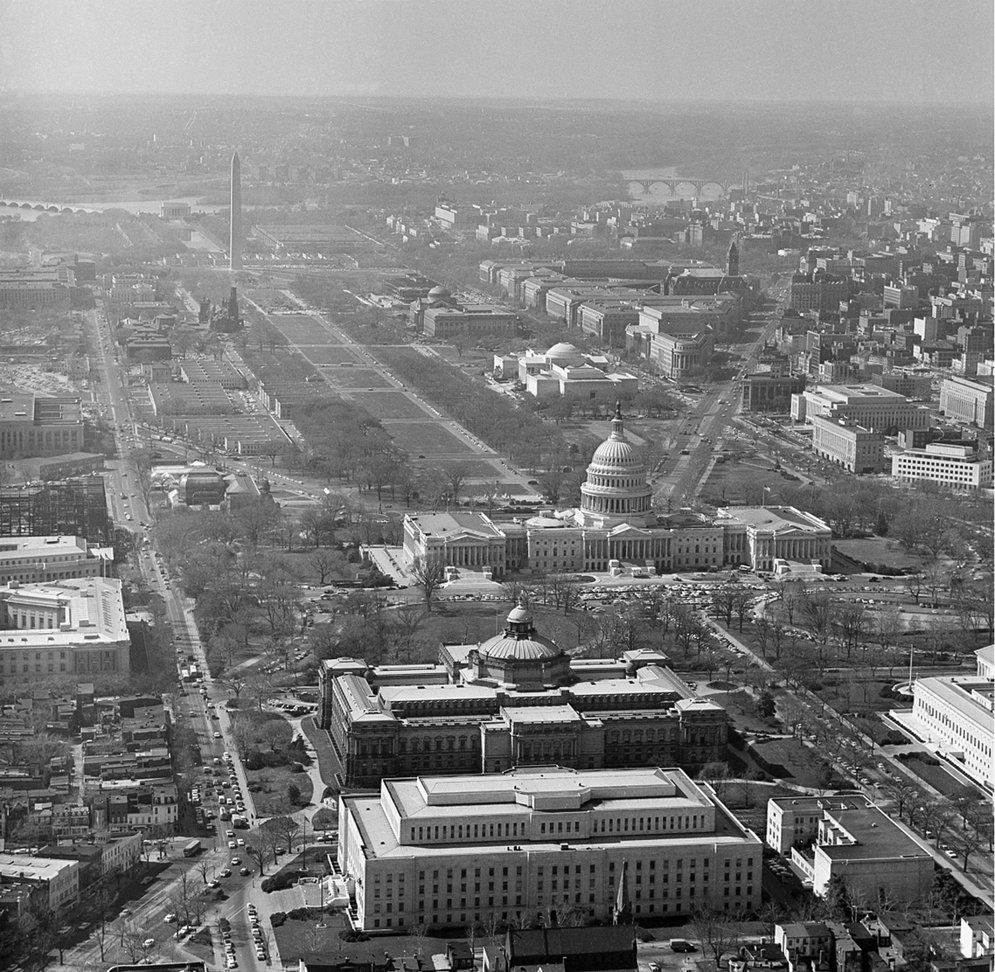 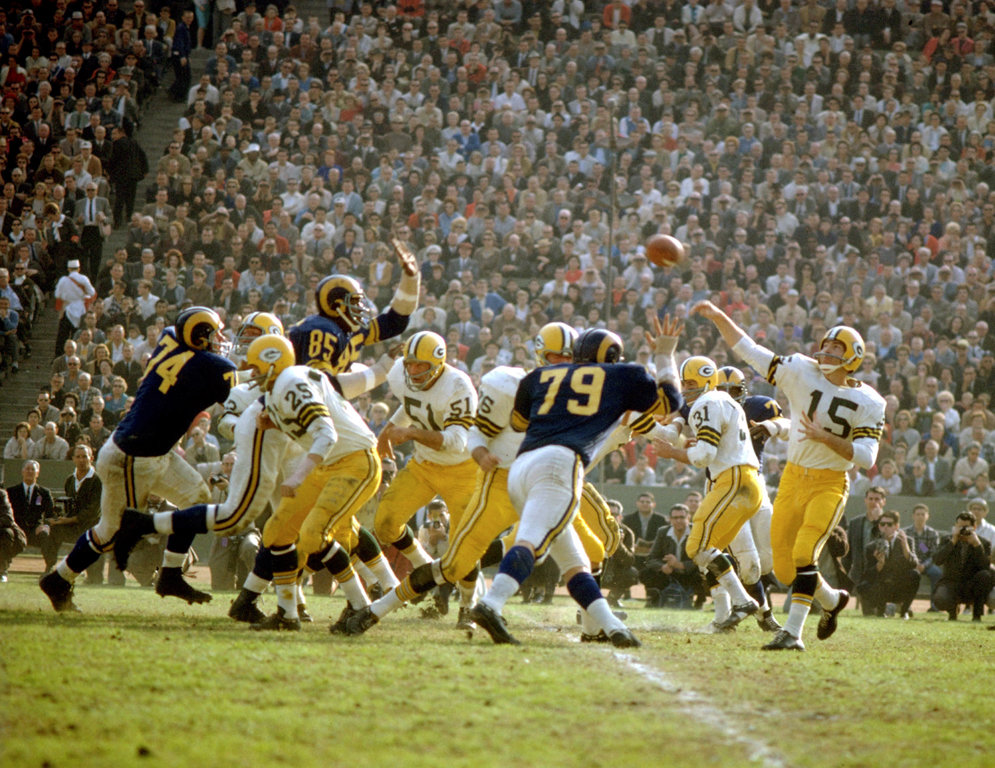 In 1962, the NFL signs a two-year deal with CBS to televise all of the league’s regular-season games for nearly $4.7 million a year. The revenue is to be shared among all NFL teams. (AP Photo/NFL Photos) 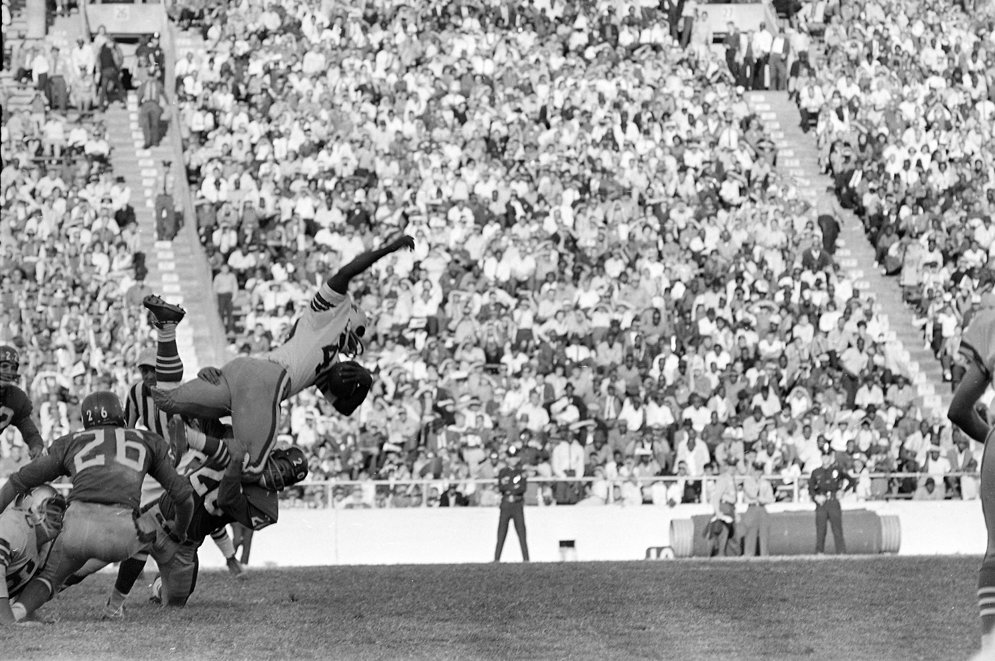 In validation of the NFL’s growing popularity, CBS outbids ABC and NBC in 1964 for the right to air the NFL’s regular-season games by offering to pay $14.1 million a year. NBC then signs a deal with the AFL for more than $7 million per year over five years. (AP Photo) 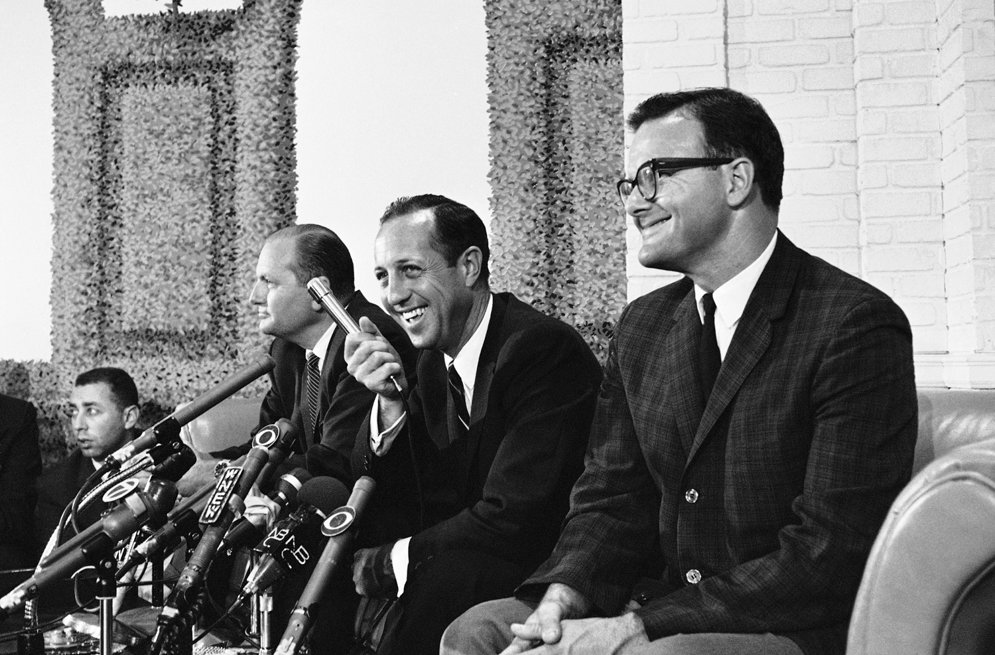 In 1966, the NFL and the AFL agree to merge under a clearly defined four-year timetable. (AP Photo/John Duricka) 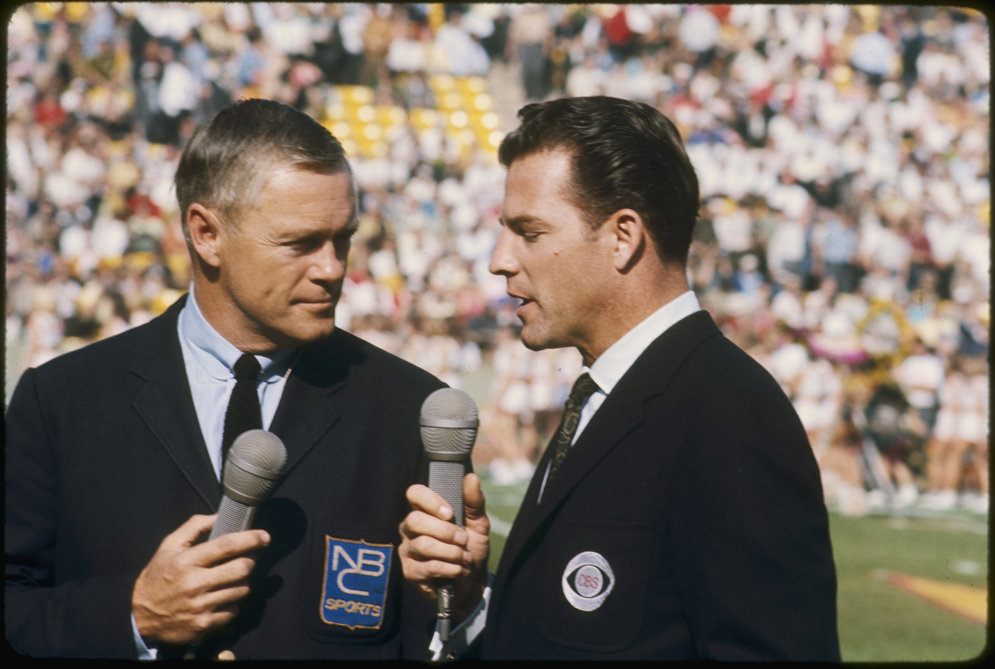 The first Super Bowl is played in 1967. Airing on two networks because of separate NFL and AFL network relationships, it attracts more than 50 million viewers. (AP Photo/NFL Photos) 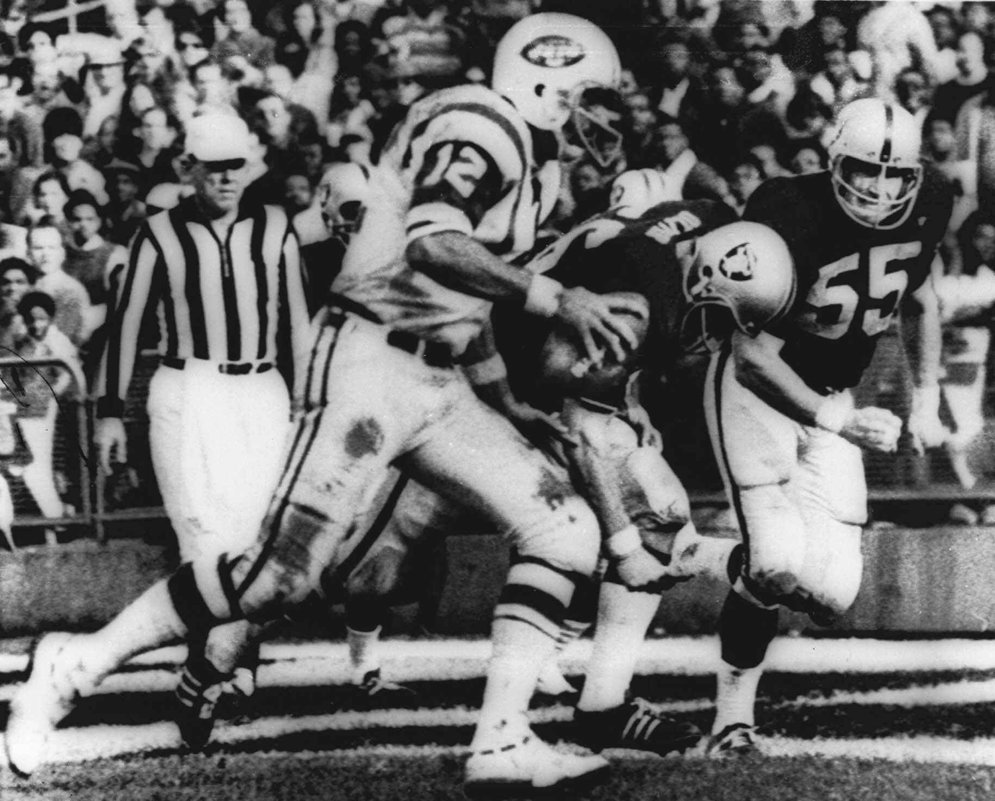 NBC cuts away from its Nov. 17, 1968 broadcast of a contest between the AFL’s New York Jets and Oakland Raiders with 50 seconds remaining to begin the network’s scheduled broadcast of “Heidi,” a dramatization of the popular children’s book. In those 50 seconds, the Raiders score two touchdowns for a come-from-behind 43-32 victory. Angry callers flood the network’s switchboards to complain about what becomes known as the “‘Heidi Bowl” and affirm the sport’s TV popularity. (AP Photo)

With the completion of the NFL-AFL merger in 1970, the NFL negotiates television contracts with CBS, NBC and ABC that amount to more than $46 million a year. (AP Photo/Vernon Biever) 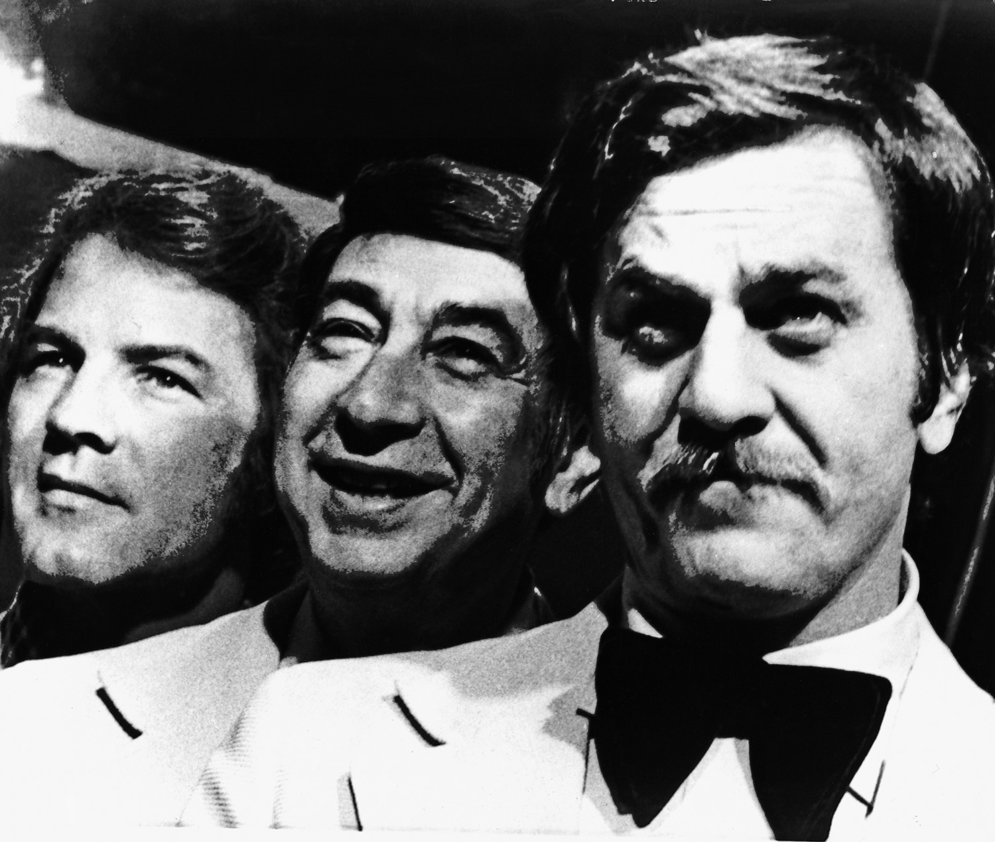 “Monday Night Football” debuts on ABC in 1970. To make the games more of a spectacle, producer Roone Arledge uses nine cameras, including one sideline and two hand-held cameras, at a time when rival networks are using four or five for their Sunday broadcasts. (AP Photo) 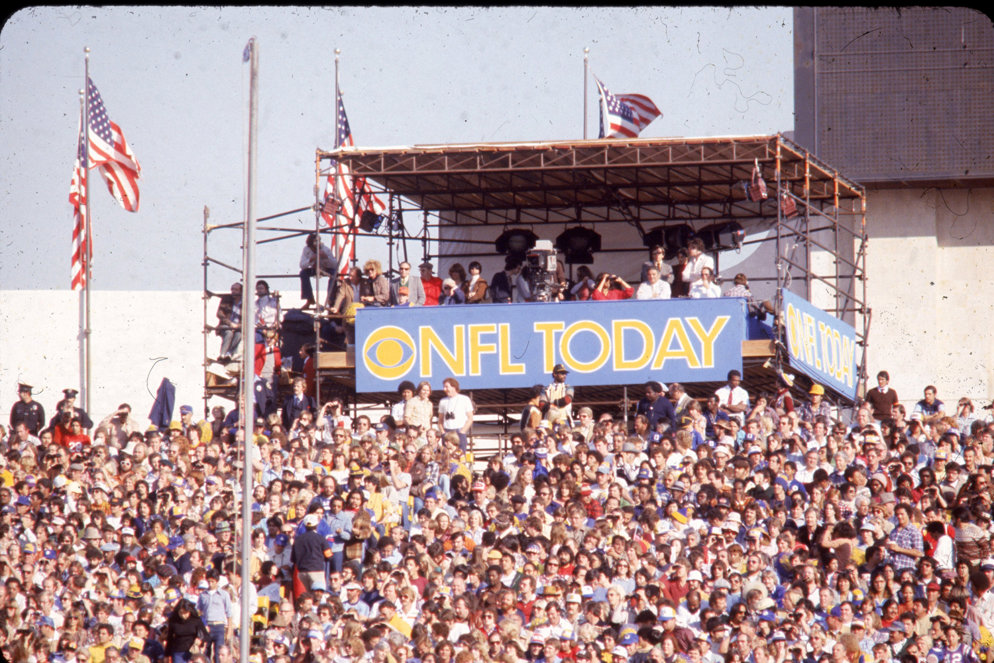 In 1978, the NFL signs four-year contracts with ABC, NBC and CBS that, combined, are reported to reach $1 billion for the first time. (AP Photo/NFL Photos)
Prev Next
Expand

Congress’ 1961 decision to allow sports leagues to negotiate their own collective television contracts let the NFL set up a system to share annual television revenue equally among all teams.

Before then, big-market teams like the New York Giants could earn 10 times as much money as small-market teams like the Green Bay Packers, which gave the Giants much more cash to sign the best players. But by equally distributing the television revenue — in addition to sharing revenue from other sources, such as merchandising and ticket sales — the league ensures that every team has the financial ability to compete on and off the field.

The NFL’s revenue sharing has maintained competitiveness across all teams and has helped the league avoid financial disparities faced by other sports that gave teams nearly insurmountable advantages. Other major sports leagues have modified their revenue sharing since 2000 to adopt systems more like the NFL’s.

All of this contributes to greater parity among teams, competitive games and more teams in the playoff hunt each year — improving the game for fans, players, owners and the league’s broadcast partners.

Perhaps the biggest impact and symbiosis in the NFL-television relationship involve advances in the technology that enabled the league to grow and flourish and led to its rise to prominence. Since that first game in 1939, broadcasters and the NFL have continued to innovate and push the limits of how television can enhance the NFL experience.

Instant replay, initially used for just one play during the Army-Navy game in late 1963, soon would become ubiquitous for NFL broadcasts, especially when slow motion and freeze-frame capabilities were added and enhanced.

Replay made games more entertaining. It provided a natural filler for the sport’s many breaks in play and could be used to highlight hard hits, battles in the trenches, great runs and catches, and other key plays. Broadcasters also used replay to better explain the game’s nuances, creating greater fan awareness, understanding and involvement.

Inevitably, instant replay became commonplace, increasing the pressure on the NFL to find a way to use the technology to help game officials make the correct calls.

Replay provided broadcasters and viewers with visual evidence, in slow motion, to second-guess the judgment calls officials made on the spot at full speed. Howard Cosell, one of the most influential sportscasters of his day, captured the frustration while in the broadcasting booth for “Monday Night Football.” After an apparently incorrect call on a catch in the end zone, the exasperated commentator declared to the national audience: “That’s absurd; all they gotta do is roll the tape!”

But the technology wasn’t advanced enough yet to quickly and efficiently review plays. The NFL tested replay review during the 1978 preseason and determined that to get the calls right, it needed at least 12 cameras to have enough angles on every play. But any system would rely on the broadcast feed, and the networks were not yet using that many cameras.

After broadcasters began using more cameras — and other technology improved — the NFL owners approved instant replay reviews in 1986. They killed the system in 1992, citing delays and incorrect calls, but brought it back for good in 1999.

This is symbiosis in action. Television’s technological advances, embraced by the NFL, are used to improve the quality of the product the broadcasters are showing: the game.

Television’s impact on the game also can be realized in other ways — by teams and by the league.

It didn’t take coaches long to realize the power of cameras and film as coaching tools. Cleveland Browns coach Paul Brown became the first coach to use film to scout other players and coaches and to evaluate his own players.

Today, every team uses coaches’ tapes. In addition to the network feed, the NFL captures game action from two cameras positioned high above the field in every stadium. The “All-22” angle captures every player on the field in a single shot, and the “End Zone” camera provides a downfield view as the play unfolds. The league now makes these resources available to fans through NFL Game Pass as well.

The proprietary NFL Vision software also enables the league to use game footage to help protect players and evaluate both the officials and the rules of the game.

At each game, an independently certified trainer contracted by the league uses NFL Vision to monitor the broadcast feed and identify potential injuries. In plays during which a possible injury occurs, this spotter immediately notifies on-field medical staff and can even transmit a replay to a sideline monitor for the trainer or doctor to view.

The Officiating Department reviews network television footage and coaches’ tape to evaluate officials from every angle. The software also allows GameDay Central technicians to isolate plays that merit further review and bring them to the league’s attention. They can also store and collect important game data.

The stored footage from the television feed even contributes to the NFL’s rule-making: League officials involved in the process study game film to help them research what to do and track trends, as they did in examining kickoff returns to determine the factors contributing to injuries on the play.

Television also improves the experience for fans attending the games. Technology has raised the quality of the at-home viewing experience so high that the NFL and its clubs always search for ways to provide a better in-stadium experience.

Oversized video scoreboards have become the norm in all NFL stadiums. Fans rely on them for replays and closer views of game action. Home teams use them to fire up the crowd and entertain the fans between plays. 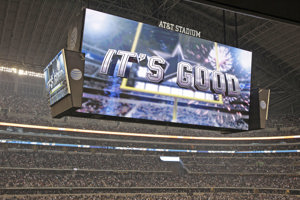 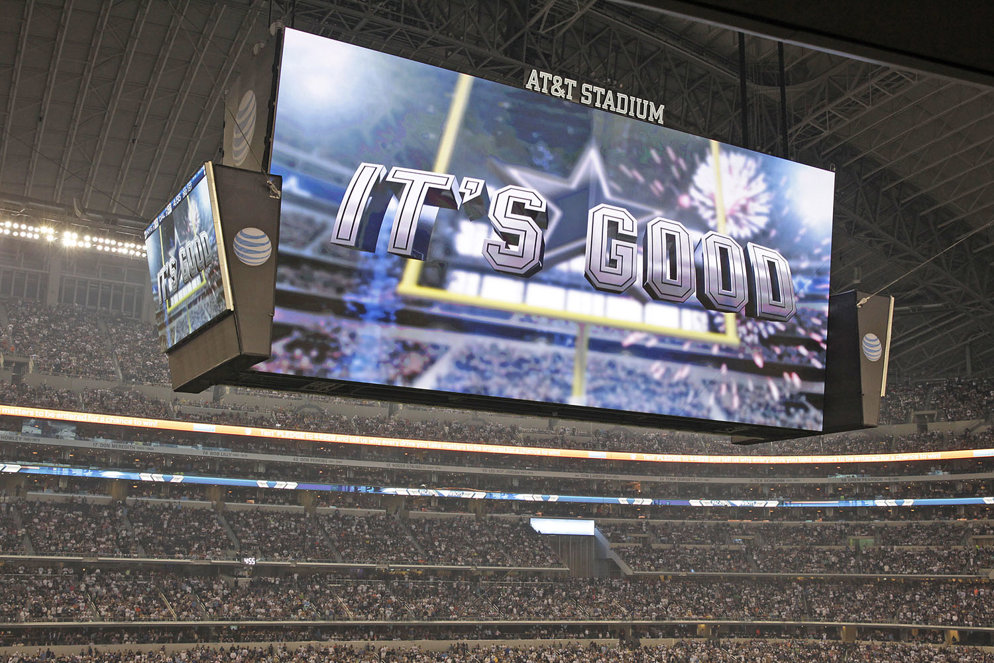 The Dallas Cowboys started the in-stadium display arms race when AT&T Stadium opened in 2009. More than 4,900 52-inch flat-panel TVs would be needed to equal the size of a screen on the center-hung, high-definition video scoreboard. (AP)

The Houston Texans' two high-definition video scoreboards, unveiled in 2013, were for a brief time the widest in professional sports, stretching more than 277 feet — six times bigger than the ones they replaced. (AP/Aaron M. Sprecher) 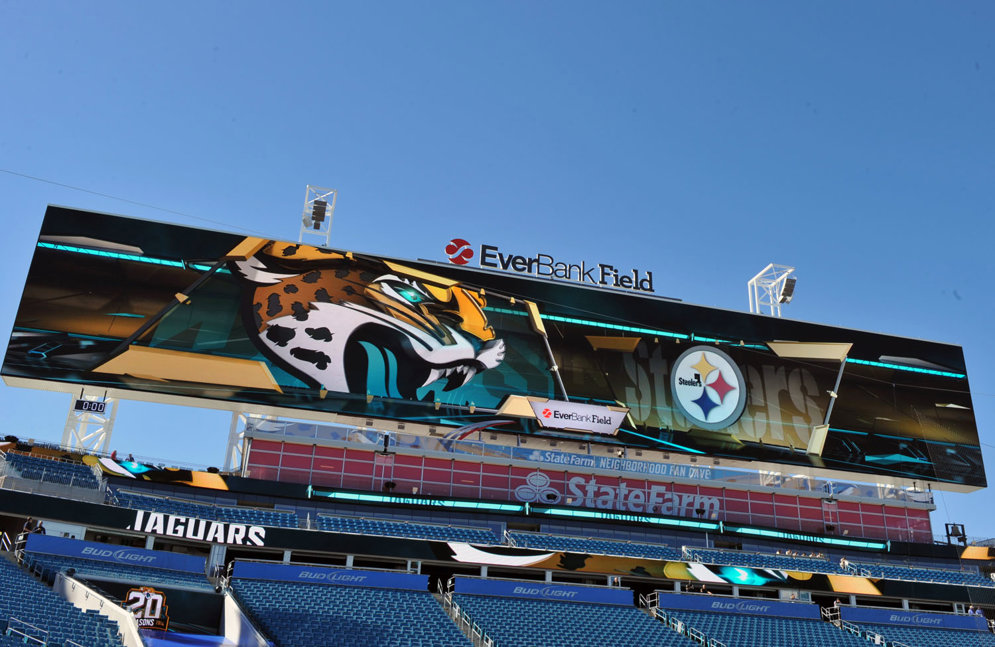 The Jacksonville Jaguars in 2014 introduced two high-definition video scoreboards above each end zone that are 85 feet longer than the Texans' screens and offer more than 22,000 square feet of video. (AP/Al Messerschmidt) 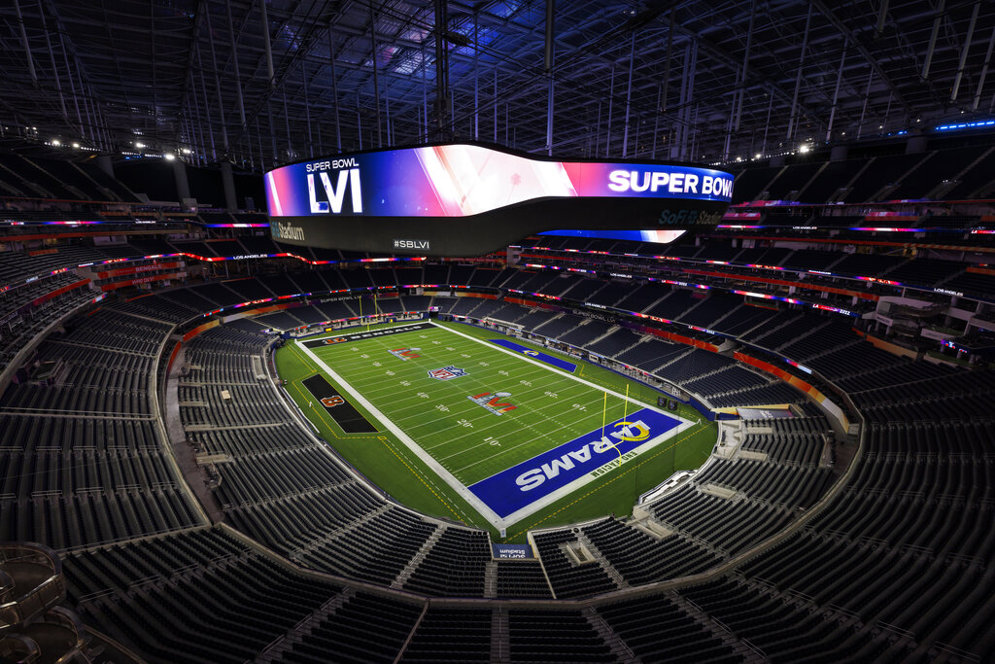 The Los Angeles Chargers and Rams’ SoFi Stadium features an Infinity Screen with the most LEDs ever used in a sports or entertainment venue, and the first and only 4K, end-to-end video production in a stadium. (AP/Ryan Kang)
Prev Next
Expand

Of course, NFL football has been very good for TV too. The games are ratings behemoths that provide networks with advertising dollars, along with viewership that benefits the networks’ promotions and non-NFL programming. Like any good relationship, this one remains a two-way street, benefiting both the broadcasters and the game. 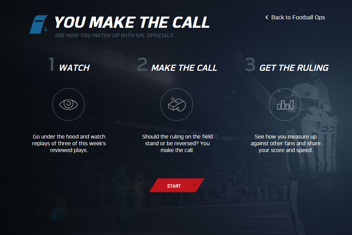 You Make The Call

See how you match up with NFL officials