On October 2, 2005, the Arizona Cardinals and San Francisco 49ers faced off at Estadio Azteca in Mexico City. 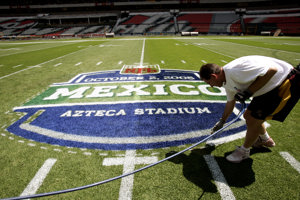 The NFL Fútbol Americano game at Estadio Azteca in Mexico City was the highest attended regular-season game in NFL history. Although that record has since been surpassed, Estadio Azteca still holds the distinction of having three of the five largest in-person crowds for any NFL game.

Dubbed “NFL Fútbol Americano,” it was the first regular season game held outside the United States. With 103,467 fans in attendance, the game also featured the largest crowd to watch a regular-season game in NFL history.

But the NFL Fútbol Americano game was a turning point for the NFL. The game was a precursor for the NFL International Series — a dedicated effort to play a consistent schedule of regular season games abroad. 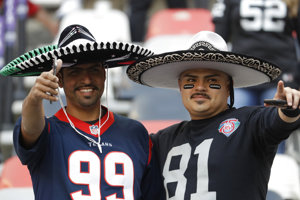 The NFL launched the International Series on October 28, 2007, when the New York Giants faced off against the Miami Dolphins at London’s Wembley Stadium. The Giants won 13-10 en route to the franchise’s third Super Bowl title. From 2007-12, Wembley Stadium hosted one regular-season NFL game each season.

In 2012, the Jacksonville Jaguars agreed to play one home game at Wembley Stadium each year from 2013-16. The Jaguars would later extend the agreement through 2020. The NFL held two International Series games at Wembley Stadium in 2013 and three in 2014 and 2015.

The International Series expanded in 2016 with the league’s return to Mexico City’s Estadio Azteca. That season also included the first of three games at London’s Twickenham Stadium.

In 2019, the Oakland Raiders and Chicago Bears played the first game at London’s brand-new Tottenham Hotspur Stadium, which will host two games each season for 10 years as part of an agreement with the NFL. In total, the International Series featured four games in 2016, five games in 2017, three games in 2018, and five games in 2019.

See the five International Series games scheduled for the 2022 season.

The International Series was suspended in 2020 due to the global COVID-19 pandemic but resumed in 2021 with two games at Tottenham Hotspur Stadium. Through the 2021 season, the NFL has played 30 regular season games in London and four in Mexico City.

Aug. 12, 1950: The first NFL game is played internationally. The New York Giants defeated the Canadian Football League’s Ottawa Rough Riders in a preseason contest, 27-6, at Ottawa’s Lansdowne Park. It was the first of seven exhibition games between NFL/AFL and CFL teams between 1950-61. (AP/Harry Harris)

Aug. 16, 1976: The first NFL game is played outside of North America in Tokyo. The St. Louis Cardinals defeated the San Diego Chargers in a preseason matchup, 20-10. (Photo: NFL)

Aug. 6, 1983: The first NFL game is played in Europe at London’s Wembley Stadium. The Minnesota Vikings defeated the St. Louis Cardinals, 28-10, in the preseason. (AP/Bob Dear)

Aug. 3, 1986: The American Bowl series kicks off at Wembley Stadium in London. The Chicago Bears defeated the Dallas Cowboys, 17-6. The American Bowl ran from 1986 to 2005, with 40 preseason games in the U.K., Ireland, Spain, Germany, Canada, Japan, Mexico and Australia. (AP/Ron Heflin)

Aug. 14, 1988: Sweden hosts the Volvo American Football Classic preseason game at Gothenburg’s Ullevi Stadium, where the Minnesota Vikings defeated the Chicago Bears, 28-21. Not a part of the American Bowl series, it is the only NFL game to be played in Sweden. (Photo: Minnesota Vikings)

Aug. 15, 1994: Estadio Azteca in Mexico City hosts its first NFL preseason game. The Houston Oilers beat the Dallas Cowboys, 6-0, in a game that still holds the record for most fans (112,376) at any NFL preseason or regular season game. (AP/Ron Heflin)

Oct. 2, 2005: NFL Fútbol Americano marks the first regular season NFL game to be played on foreign soil. In front of a crowd of 103,467 at Estadio Azteca in Mexico City, the Arizona Cardinals defeated the San Francisco 49ers, 31-14. (AP/Eduardo Verdugo)

Nov. 21, 2016: The NFL returns to Mexico City in the regular season. The Oakland Raiders defeated the Houston Texans, 27-20, at Estadio Azteca, the first of three games played there from 2016-19. (AP/Ben Liebenberg)

Oct. 10, 2021: The International Series resumes with two games at London’s Tottenham Hotspur Stadium after a pause in 2020 for the COVID-19 pandemic. The Atlanta Falcons beat the New York Jets, 27-20, in Week 5, and the Jacksonville Jaguars defeated the Miami Dolphins, 23-20, in Week 6. (AP/Gary McCullough)

Feb. 9, 2022: The NFL announces that Munich and Frankfurt will host four International Series games from 2022-25. The 2022 game at FC Bayern Munich Stadium will be the first regular season game in Germany. Five American Bowl preseason games were played in Berlin from 1990-94. 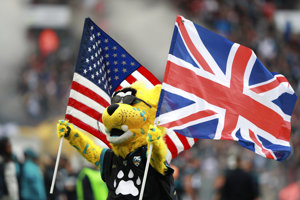 Jaguars Across the Pond

The Jacksonville Jaguars’ unique agreement with the NFL has made them the most frequent visitors to London in the International Series.

The Jaguars volunteered to host one game each year in London’s Wembley Stadium from 2013-19. After the COVID-19 pandemic put the International Series on hold, the Jaguars returned to London in 2021 for a game at Tottenham Hotspur Stadium.

In 2022, the Jaguars will host another game at Wembley Stadium. Jacksonville is 4-4 in games played in London.

Learn more about what it takes to create the NFL schedule.

Beginning in 2022, there will be at least four games played internationally every season. Each NFL team is guaranteed to play a home game at an international site every eight seasons.

As part of the league adopting a 17-game schedule in 2021, AFC and NFC teams will alternate seasons where they have nine home games. The host teams for international games will be selected from the conference with the ninth home game, so clubs still will host eight games in their home stadium. For example, since NFC teams have a ninth home game in 2022, four NFC teams will be selected to host an international game that season.

Teams can still volunteer to play home games abroad, just as they have in previous seasons.

Teams usually have their bye week after an international game.

Schedule makers will consider the three-week window around the international games to try to find ways to make lengthy travel less of a burden on the teams. 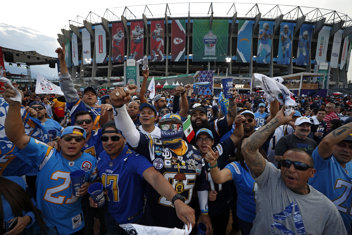 It takes thousands of computers and six NFL executives to create the NFL’s 272-game masterpiece.

International Players’ Road to the NFL