Imagine hosting an event that will be attended by 70,000 people, with millions more watching on TV. As everyone arrives at the venue or tunes in, they fully expect the event to start on time and entertain them for the next three hours, without any major glitches.

And then imagine making it happen in as many as 13 cities on the same day. Every weekend. For more than six months.

That’s the tall order facing the NFL’s Game Operations staff week after week as they manage what goes on behind the scenes at every NFL game. Fans have come to expect that the games will run flawlessly and that they can focus their attention instead on the league’s superstars as they display their talents on the field. 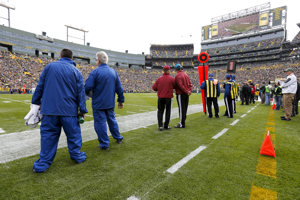 And that’s what fans get — week after week, season after season.

They see the results of this hard work in the action on the field. What they often don’t see are the hundreds of people behind the scenes who appear to effortlessly manage the many moving parts and the massive mix of personnel, technology and equipment.

The locker rooms have to be fully stocked with the same comforts; footballs must be properly prepared; the playing field has to be certified that it is in compliance with the strict requirements. All of the technology — the communications systems for coaches, players and game officials; Microsoft Surface tablets; coaches’ booth monitors; and instant replay and injury video review systems — must all be functional.

All of the people, cameras and equipment on the field will be in their assigned place, and all of the pregame activity will proceed like clockwork.

A representative from the NFL Football Operations department attends each game to ensure that both teams are complying with league policy and to serve as the communication liaison to the Game Day Operations Center back in New York.

Check out the responsibilities of Gameday Central personnel in New York.

League staff members issue game credentials and parking passes for the NFL game day staff. They coordinate with representatives of the television networks and work with experts who certify that the fields are ready for play. They coordinate scheduling and travel for all officials.

And they do this every week.

Success requires an organized, rigorous system that clearly defines where everyone needs to be, what tasks need to be done, and when they need to be started and completed. NFL Game Operations maintains a detailed checklist and timeline with specific instructions to make sure everything gets done.

It begins seven days before kickoff and continues through the end of the game.

Seven days: The visiting team's equipment manager works on logistics for their arrival to the stadium, including any special items requests in the locker room.

Three days: The home team tests and certifies that its playing field complies with NFL requirements on hardness, infill depth, evenness and other factors. Any issues with the surface must be fixed, retested and certified prior to game day.

24 hours: Game officials must be in the city in which they are working that week. If severe weather is anticipated, officials should arrange to arrive earlier. The crew meets the day before kickoff to reviews both teams’ tendencies and any weekly points of emphasis from the Officiating Department.

18 hours: Visiting teams traveling by airplane must be in the game city.

4 hours: All local game day assistants must arrive at the stadium and begin setting up their respective equipment/systems.

3 hours: Sideline and coaches’ booth technicians test the wireless equipment in each bench area and AudioCom wired equipment in each coaches’ booth. (If the coaches’ communications system (C2C) or Coach-to-Player communication system (C2P) for one team suffers a total system failure at any point during the game, the other team’s system will be shut off until functionality is restored to the affected team.) C2P technicians test and distribute C2P equipment to each club’s equipment manager. The injury video review system technician distributes a case containing fully charged radios to the visiting club’s athletic training staff at the entrance to the visiting locker room. Field technicians report to the stadium and set up field monitor systems.

2 hours, 30 minutes: The home club delivers the wireless microphone to the referee.

2 hours, 15 minutes: Each club provides 12 primary and 12 backup like-new, properly prepared Wilson official NFL footballs to the referee for inspection. Additionally, one representative from each team can inspect and prepare the kicking balls that the officials received directly from Wilson Sporting Goods. 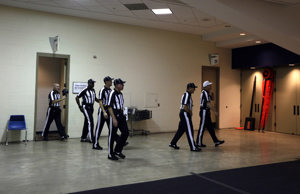 The 90-minute officiating meeting is critical for maintaining the schedule and coordinating with broadcasters. It includes eight mandatory elements, spelled out in the league’s Game Operations Manual.

2 hours: The injury video review system technician distributes a radio to the local league-appointed unaffiliated neurotrauma consultants, airway management physician and ATC spotters. The ATC spotters — located in a stadium booth — are certified athletic trainers (ATC) that help each team’s medical staff spot potential concussions or other head and neck injuries. A neurotrauma consultant on each sideline helps with assessing concussions, and one in the ATC Spotter booth helps identify potential head injuries. An airway management physician, certified in rapid sequence intubation, stands between the 25- and 30-yard lines near paramedics who have coordinated arrangements for immediate transport via police escort or medevac helicopter to a predetermined hospital.

2 hours: Game officials test the wireless microphone units (primary and backup). A member of each club’s sideline staff, designated as the liaison with the referee, keeps spare batteries for the units should they need to be replaced. The referee meets with stadium personnel at the 50-yard line of the home team’s bench area to check all necessary electronic equipment.

2 hours: All printing stations and Microsoft Surface tablets must be in place on the sidelines. These are used by the coaches for the printouts or the Sideline Viewing System, which lets them review images of opposing team coverages and schemes during play. The league office provides a four-person “purple hat” crew to set up the equipment; this crew will also take it down after the game ends.

2 hours: The visitor’s half of the field must be clear at least 120 minutes prior to kickoff, unless the field is tarped in accordance with league rules.

100-minute security meeting: One hour and 40 minutes prior to kickoff, the referee, league and club security representatives, NFL Football Operations representative, stadium security and the local senior public safety official in charge of the field meet to review procedures for responding to an emergency situation before, during or after the game. 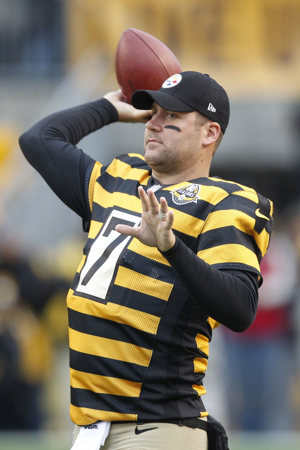 In addition, each club can wear a league-approved optional uniform — alternate, classic or color rush — for up to three home or away games in the regular season and an unlimited number of games during the preseason. Those selections also must be submitted to NFL Football Operations by July 1 each year. Visiting teams can wear an optional uniform too, but only if the NFL determines it is of “sufficient contrast” with the home team’s jersey color.

90-minute officiating meeting: One hour and 30 minutes prior to kickoff, the referee and other game officials meet in their locker room with both teams’ PR directors, the PR departments’ sideline communications personnel, the NFL sideline TV coordinator (Green Hat), the NFL football operations representative, the TV network representative and the network’s on-field communications coordinator (Orange Sleeves). This critical meeting includes the review of broadcasting policies and procedures, exchange of Game Day Administration Reports (which includes a club’s inactive list, players designated to have C2P components in their helmets, and players/coaches wearing microphones), synchronization of watches and review of the schedule, such as when each team must leave its locker room.

90 minutes: The grounds crew must have the tarp completely removed from the field if the field was covered due to precipitation. If the stadium has a retractable roof and/or wall, the home club notifies the referee or on-site NFL Football Operations representative whether the roof and/or wall will be open or closed during the game. An open roof or wall can be closed after this point only under certain conditions, including precipitation or if hazardous conditions, such as lightning, endanger people in the stadium.

75 minutes: Two game officials and a PR representative for the home or visiting team meet with the head coaches in their locker rooms to provide a copy of the schedule and discuss any timing issues.

60 minutes: When applicable, the stadium roof and/or wall must be in its designated opened or closed position, and all lights must be turned on in domed stadiums or stadiums with a retractable roof in the closed position.

60 minutes: C2P communications technicians must be present in the bench area of each club. They remain there throughout the game. Field technicians prepare monitor stations for an equipment check by the referee.

60 minutes: The official team warm-up period begins. Each team must warm-up on its designated half of the field, as designated in the NFL's Game Operations Manual. During warm-ups, a league uniform inspector checks every player to ensure that all uniforms conform to league specifications.

35 minutes: The referee checks his microphone with the television network broadcasting the game.

20 minutes: Earliest a visiting team can be required to end its warm-ups, absent a leaguewide obligation or event being conducted on the field during the warm-up period.

Within 20 minutes, the schedule varies slightly depending on the game time, the network broadcasting the game and home team production elements.

The Game and Beyond

Game day staff members continue to work throughout the game, ensuring that all the systems continue to work. They run the instant replay system; help spot and evaluate injuries; move the chains; provide game or kicking balls to the game officials; monitor and resolve frequency conflicts; assist the network’s sideline reporters; and more.

Learn about the NFL's Emergencies and Unfair Acts Policy.

League and team personnel take down and store all of the equipment when the game ends, keeping it secure and preparing it for the next game.

These steps will be repeated at every stadium, every game, every week, as will all of the planning and preparation before each contest. NFL Game Operations staff members coordinate myriad employees and specialists to make sure that each contest runs smoothly for the good of the game, coaches, players and fans.

Keeping the lines of communication clear on gameday.