The NFL Legends Community celebrates, educates, embraces and connects all Legends with each other, their former teams and the league.

Since its launch in 2013, the Legends Community peer-to-peer model has fostered one of the strongest brotherhoods in professional sports.

Legends Community Directors and Coordinators lead the efforts across the country. They streamline communication and serve as a central resource for players to learn about programs and benefits available to them. They played in different eras, for multiple teams and at various positions, but they are passionate about helping their fellow Legends.

“The NFL Legends Community works to ensure that every Legend has the best possible opportunity to live a fulfilling life after his playing experience,” says Troy Vincent, NFL Executive Vice President of Football Operations

Providing first-class support to Legends and their families. 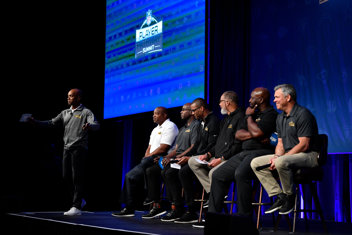 Supporting Legends and their families throughout their transition.

Assisting Legends and their families as they live healthy and fulfilling lives.