On April 8, 2015, Sarah Thomas achieved her football dream by becoming the first woman to officiate full time in the NFL.

Thomas, who played basketball in college, is no stranger to breaking down barriers; she has been a pioneer for her entire officiating career.

Prior to reaching full time status in the NFL, Thomas officiated NFL preseason games, worked in professional training camps and attended several officiating clinics. Working alongside veteran NFL officials and elite football talent prepared her for the next level. She was also the first woman to officiate a college bowl game — the 2009 Little Caesars Pizza Bowl between Ohio University and Marshall University.

Since being assigned to an NFL officiating crew in 2015, Thomas rapidly began her ascent in the officiating realm. Thomas started as a line judge, then became a down judge in 2017.

In January 2019, Thomas became the first female on-field official in playoff history. She was part of the NFL officiating crew for the Divisional Round game between the New England Patriots and the Los Angeles Chargers.

In 2021, Thomas reached a new milestone in her already successful officiating career when she was named down judge in Super Bowl 55. Thomas is the first woman to ever officiate in a Super Bowl, paving the way for many more women. 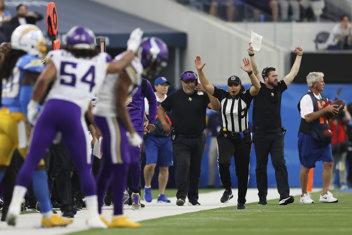