Tens of millions of NFL fans watch games each week during the season. During each contest, the league’s world-class athletes conduct themselves in a way that honors the sport and respects the game, their fellow players, the fans and the league.

Occasionally, a player’s actions on the field may fall below the league’s expectations. On-field action is governed not only by the rules of play, but also by a code of conduct, established by the league and the NFL Players Association, that specifies the behavior that will not be tolerated and the minimum fines for each transgression.

It’s the job of the compliance officers within NFL Football Operations to make sure that players adhere to this code and exhibit exemplary behavior during every one of the 334 total preseason, regular season and playoff games. In doing so, the compliance team helps to fulfill the NFL’s responsibilities to players, officials and business partners, as well as to the game’s young fans and their parents.

The Compliance Department’s jurisdiction covers player behavior on the field, including endangering a fellow player’s safety, fighting, unsportsmanlike conduct and other acts that could be deemed “detrimental to the league.”

This code of conduct is not handed down from on high. It is not designed to take the fun out of the game or raise money for the league.

Most rules and fines are the result of the collective bargaining process between the NFL and the NFL Players Association. Before each season, every player receives a copy of the fine schedule, which lists major infractions, the resulting minimum fines and the appeal process. Players sign a form acknowledging that they agree to follow the code of conduct and understand the violations and fines. The code protects players and officials, the game’s integrity and fairness, and the league itself.

When feasible, the league gives players every opportunity to avoid a fine: The NFL communicates with players and teams year-round so they understand what the rules are, why they exist, what happens when they’re broken and how the appeals process works.

Since 2009, about $4 million a year has been used to assist former players.

CONSISTENT ENFORCEMENT AND A SHARED RESPONSIBILITY

The rules exist for the good of the game, and complying with them is a shared responsibility. During the offseason, players receive clear instructions on violations and penalties. The NFL and its Compliance Department apply those rules consistently and fairly for all 32 teams and their players.

Football Operations staff, including Executive Vice President Troy Vincent, personally visit players who have run afoul of the rules. They review the league’s expectations and offer advice on preventing future fines or suspensions. In many cases, players are shown videos of their past infractions and are told how to correct the behavior that resulted in the fine.

“Above all else, the NFL’s role is to provide equity across our rules and competitive balance in the game.”

Infractions and accountability measures, such as fines, are specified to make sure that players maintain control of their emotions and exhibit the utmost sportsmanship. Fines are stiff for inappropriately confronting or contacting a game official. The league will not tolerate game action that may endanger the health and safety of players, including roughing the passer, horse-collar tackles or hits on defenseless players. Fighting is strictly prohibited. Using profanity, displaying gang signs and taunting opponents also will draw the league’s attention. The Compliance Department also protects all NFL business and licensing agreements and makes sure that uniforms are worn properly — with partners’ logos displayed and others covered or removed. (While players can use any equipment they like, the only logos that can be shown are those of the league’s official partners.)

Every year, players and teams have the opportunity to provide feedback on rules and policies. Any that are believed to have had a measurable negative impact on the game or the players are re-evaluated, although player complaints and concerns may not get a rule changed. For example, when the league required all players to wear thigh and knee pads, there were many complaints before the season ranging from “It looks bad” to “It slows me down.” The league stuck to the rule; when players were surveyed on this and other topics at the end of the season, there wasn’t a single complaint about the thigh and knee pads.

The NFL makes sure that all players, teams and key staff know what constitutes a violation and what will lead to a fine or other accountability measures. Compliance officers communicate with teams that are being spotted too often for a particular foul, such as late hits. A coach can then work with the players to fix the issue and avoid additional fines.

“We hold teams responsible for those violations as much as players when that happens,” said Akil Coad, the league’s vice president of compliance. In the case of uniform violations, players are given the opportunity to either change their gear or cover the logo of a company that isn’t an NFL partner.

“We don’t want to fine anybody,” Coad said, “and we actively try to prevent it.” The league employs two former players at each stadium to help address uniform issues before the game starts and to try to avoid implementing accountability measures.

FOR THE GOOD OF THE GAME

The NFL revises the code of conduct as needed to address trends that may be detrimental to the league.

In an effort to protect quarterbacks from excessive injuries, the league redefined “illegal hits.” Initially, the number of fines for those hits spiked, but over time the number dropped as players adjusted to the change. NFL fines for illegal hits on quarterbacks have steadily declined since the changes went into effect in 2009.

Fans don’t watch NFL games to track fines and suspensions; they tune in to see two teams leave it all on the field for 60 minutes. Contests marred by dangerous or unprofessional behavior take away from the greatness of the NFL and put players at risk of injury.

The NFL and the NFL Players Association agree: Making sure players and staff conduct themselves in a manner that honors the game and safeguards it for future generations is a priority. This shared responsibility and commitment results in a great game, enjoyed by fans worldwide. 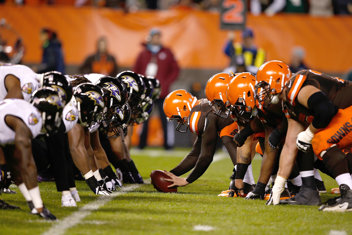