When the NFL set up an injury video review system near the end of the 2011 season, it paid off almost immediately.

The league instituted the system after Cleveland Browns quarterback Colt McCoy took a helmet-to-helmet hit in a Dec. 8, 2011, contest and was sent back into the game without being tested for a concussion. The Browns said that the team’s trainers didn’t see the hit because they were tending to other players and that no one told them about it.

After the game, McCoy was diagnosed with a concussion.

“It seems inconceivable, but nobody alerted anyone,” former team president Mike Holmgren said after he met with representatives of the NFL and the players union about the incident. “So how do we do this so the doctors get the information they need? Best thing we could come up with is putting in a process to have somebody say something.”

The league responded quickly: Within two weeks, independent certified athletic trainers (ATC spotters) were in place in stadium booths at every NFL game to serve as another set of eyes, watching for potential injuries. A video component was added to the new system before the wild card playoff games on Jan. 7 and 8, 2012.

In one of those games, a player took a knee to his helmet. Though the player got up quickly and managed to go to the sideline, his teammates urged the team’s trainers to check him for a concussion. He had almost completed the evaluation to reenter the game when the team's head athletic trainer checked the video, which confirmed that the player had collapsed from wooziness before getting back on his feet.

Seeing the potential benefit to player safety, the NFL permanently instituted a more sophisticated system before the start of the 2012 season.

The ATC spotter’s primary role is to observe play on the field and monitor the broadcast feed of that game to identify players who may potentially be injured on a play, with an emphasis on concussions and other head and neck injuries.

Using the injury video review system’s monitor and recording equipment to monitor, the ATC spotter watches and reviews network footage of the game. If the ATC spotter observes a play that may have resulted in a concussion or injury on the field, he or she will call that team’s bench area to speak with a credentialed team physician or the head athletic trainer to relay the details of the potential injury he or she observed. The spotter will confirm the player’s jersey number and the situation in which the injury may have occurred.

The ATC spotter must speak directly to the team physician, unaffiliated neurotrauma consultant, or head athletic trainer when reviewing a potential injury. They cannot relay the information to other team staff assigned to answer the bench phones. 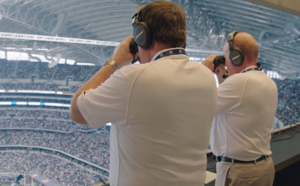 The Eyes in the Sky

Today these “eyes in the sky” consist of a five-person crew: two ATC spotters, two video technicians, and starting in the 2018 season, an Unaffiliated Neurotrauma Consultant (UNC). Each team member helps to track the on-field action and catch potential injuries as they happen.

The ATC spotter does not diagnose any injuries or suggest treatment, but simply alerts the team’s medical personnel to a potential injury and describes how the injury happened when possible.

The injury video review system uses NFL Vision technology and the broadcast feed to allow the ATC spotter to watch the feed and the play on the field. From high above the field, the spotter, with help from an injury video technician, looks for potential injuries, with a special focus on concussions and other head and neck issues. When the spotter spots a potential problem — either in real time or after reviewing replays — he or she tells the technician to tag and label the video.

When immediate action is required, the spotter can call the bench to speak with the team physician or head athletic trainer and provide details of a potential injury. The spotter can send the video via fiber optic cable to a sideline monitor where the physician, trainer, or Unaffiliated Neurotrauma Consultant can see the play. The medical staff, assisted by an on-field injury video technician, can ask for slow motion, specific angles, rewind and more.

New in 2015, ATC spotters may use a medical timeout to stop the game to remove a player from the field for medical examination. The spotter can only stop play with clear visual evidence of two very specific criteria:

If a situation meets these narrowly defined circumstances, the ATC spotter will take the following steps:

The designated game official will immediately stop the game, go to the player in question and wait for the team’s medical personnel to arrive and ensure that the player is attended to and escorted off the field.

The game and play clock will stop (if running), and remain off until the player is removed from the game. Both clocks will start again unless the play clock was stopped inside 10 seconds, in which case it will be reset to 10 seconds.

The player’s team will have an opportunity to replace him with a substitute, and the opponent will be able to match up as necessary. No member of the team’s coaching staff may go on to the playing field, and no other players may go to the sideline unless he will be replaced by a substitute.

Player evaluations must last at least one play, unless the team decides to take a timeout, the period ends, the two-minute warning occurs or the injury was due to a foul by an opponent. An injury timeout will not be charged to a team that has a player removed during this process.

All ATC spotters are retained and assigned by the NFL and must meet the following criteria:

Any deliberate attempt by a team to stop play unnecessarily; to prolong or delay the process; to improperly take advantage of a stoppage in play; or to influence the actions of the ATC spotter will be considered an “unfair act” and subject to appropriate discipline and to any penalty assessed by the game officials. 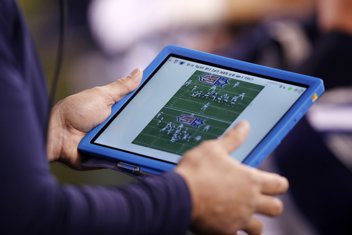