The transition from college football to one of the most exclusive clubs in the world can be daunting. With the NFL’s expanded Rookie Transition Program — the most comprehensive onboarding of rookies in sports — the league ensures that every incoming player has the tools necessary to succeed on and off the field.

The NFL Rookie Transition Program communicates with credibility, clarity and consistency, and covers a wide range of topics so that incoming players understand the league’s expectations, the benefits they have earned and the local resources — along with those from the league and the club — that are available to them.

The new Rookie Transition Program reaches all NFL rookies — drafted and undrafted — and introduces them to all of the resources that are available to them.

The previous Rookie Symposium platform provided an introduction and orientation to the league only to rookies who had been drafted.

However, nearly 55 percent of all NFL rookies signed with their clubs as undrafted free agents. That meant that more than half of the new players were not receiving the information that they needed to successfully transition to the league.

Learn how football players have evolved since the game’s earliest days.

The new Rookie Transition Program expands the league’s onboarding program to all rookies and it gives NFL owners, general managers, coaches and directors of player engagement the opportunity to share their club’s unique culture with its newest members.

“This collaborative effort permits the league to educate players about the tools and resources available for a successful playing experience on and off the field,” said Troy Vincent, NFL executive vice president of football operations. “The Rookie Transition Program allows the clubs to orient all rookies to local resources and to club culture, history, leadership and expectations.”

There are 15 mandatory topics that are presented by the league and by the people who rookies will interact with on a daily basis. This peer-to-peer format creates a collaborative environment for clear and consistent communication.

NFL Player Engagement staff will approve the schedule for each club’s program and review the content to make sure that incoming rookies from all 32 teams are providing the same introduction to the league to the next wave of NFL players.

Succeeding at the sport’s highest level requires determination and hard work. Wearing an NFL uniform comes with great responsibility, and each player is expected to represent himself, his club and the league appropriately. 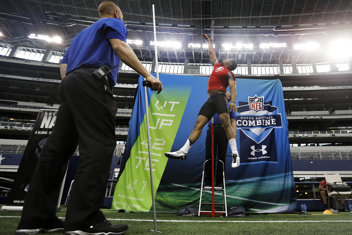