The National Invitational Camp (NIC) is the Super Bowl of the player development process. Also known as the National Scouting Combine, this four-day, invitation-only event allows NFL scouts to evaluate that year’s top draft-eligible college players on a variety of medical, mental and physical criteria. Only 300 or so players attend each year.

In addition to testing the players, the event tests the members of each NFL team’s personnel department as they make decisions that will shape the future of their franchise. The combine draws national attention as fans and media alike watch and speculate who will be drafted and where they will go.

It wasn’t always that way.

Until the 1970s, teams typically didn’t give physical exams to their potential draft picks. In 1976, the New York Jets became one of the first to invite college seniors to team headquarters for physicals and interviews.

“Besides character and intelligence, the other non-football thing we put a premium on is the medical aspect,” Mike Hickey, the Jets’ director of player personnel, wrote in a column for The New York Times in April 1983. “We attempt to have every player we are interested in have an orthopedic physical by our team physicians.”

Hickey described how those efforts had led to seven years of draft success, noting that nearly half of the 36 players the team drafted since 1977 were starters.

“It takes a lot of time and costs a lot of money, but we think it is worth it,” he wrote. “You have to cut down the odds of making a mistake.”

Other teams followed the Jets’ lead, meaning that top prospects were traveling from city to city for interviews and physicals from several NFL teams. Not only was this time-consuming and expensive, but the players — who were still in college — often had to miss classes and were subjected to multiple X-rays and other tests.

As more clubs adopted similar practices, Tex Schramm, the president and general manager of the Dallas Cowboys, recommended to the Competition Committee that teams work together to centralize the evaluation process.

In 1982, Indianapolis-based National Football Scouting Inc. (NFS) conducted the first National Invitational Camp in Tampa, Fla., bringing the top college draft picks to one location to get medical information for its 16 member clubs. That camp featured 163 players — around half the number that attend today — and established the foundation for the assessment of potential draftees.

Two more camps — run by the BLESTO and Quadra Scouting organizations — soon were established to collect information for teams that didn’t partner with NFS.

In 1985 the three camps were merged to share the costs. The league opted to have NFS — which ran the largest camp at the time — coordinate the centralized event. After holding the event in Phoenix (1985) and in New Orleans (1986), NFL moved the combine to its home city of Indianapolis, where it remains today.

Centralizing the camps allowed teams to conduct more thorough evaluations of draft prospects. In addition to considering a player’s medical history, clubs were able to spend more time on physical and psychological testing, giving the personnel departments a more holistic impression of the player before the draft.

A committee of professional NFL talent evaluators coordinates the process for selecting which prospects will attend the National Combine. The NIC, led by Jeff Foster, who has been president of NFS since 2005, coordinates the registration process and player logistics.

As with past Combines, draft-eligible prospects will not be permitted to participate in any aspect of the Combine if a background check reveals a conviction of a felony or misdemeanor involving violence or use of a weapon, domestic violence, sexual offense and/or sexual assault. The NFL also reserves the right to deny participation of any prospect dismissed by their university or the NCAA.

Individual clubs are free to evaluate any draft-eligible prospects they wish to independently, including those who have demonstrated conduct that restricted their invitation to the National Combine. These evaluations may take place at any location permitted under league rules.

As the process has expanded, so has the public’s interest. Fans and media realize that the combine offers an unprecedented level of information on the league’s top prospects. This groundswell of interest has catapulted the annual NFL Scouting Combine into the spotlight. Today, three decades after the first invitational camp, the event is a mainstay of the NFL offseason for teams, media and fans alike. Exclusive coverage of the combine is available on the NFL Network, NFL.com, NFL Now and NFL Mobile.

All Eyes on Indianapolis

Foster oversees the annual event. Working from his office in Indianapolis, he and a staff of five people gather and process all player information into one central system to share with all 32 NFL clubs.

“Most evaluators agree that the National Combine is to validate what they’ve seen on film,” Foster said. In many cases, scouts have been tracking the players for a while and already know what they can do on the field.

The top priority is gathering each player’s medical history and putting it together with the results of his National Combine examinations.

A medical advisory committee oversees the process of collecting information on all invited players before they arrive in Indianapolis. It begins by reviewing their medical histories, which are stored in a shared NFL/NCAA database and updated by physicians, athletic trainers and other specialists throughout their college careers. While the medical tests are fairly standard for all players, the committee may recommend additional studies in some cases — for example, it may suggest that a player who has a history of knee injuries undergo an additional MRI.

NFS collects the information and creates electronic medical records (EMR), which they make available to all 32 NFL clubs. If a player has to come back for additional testing, the EMRs are updated with the new information.

Bringing It All Together

Scheduling the medical evaluations, interviews and psychological tests presents an enormous logistical challenge, starting each year in mid-October and continuing to the first day of the combine in February. None of this would be possible without NFS’s health care partner in Indianapolis, Indiana University Health, which conducts all of the standard testing and the additional studies that are requested and prepares a report. In many cases, this is the most comprehensive physical evaluation most of these players have ever been through.

In 2013 we did 365 MRIs on 333 players in four days. Each MRI takes about an hour, so it’s extremely challenging to just schedule those and make sure they all happen.

In addition to the medical examinations, NFS also schedules players’ psychological tests and interviews with the clubs. Each of the 32 teams can conduct up to 60 15-minute interviews. And, though it’s not as important as the medical evaluations and the interviews, players still display their physical abilities for scouts — another component that has to be scheduled.

Foster’s team uses technology to coordinate scheduling and collecting and sharing data. “Still,” he said, “any change in scheduling can impact other events.”

And it doesn’t end there. Every April, NFS hosts a second medical-only event where it brings back players — usually around 50 — to collect additional information or conduct more tests.

The NIC makes the process of assessing the top college players more manageable. NFL scouts can identify those prospects they think can help their club succeed. It’s makes the same credible and accurate information available to all of the clubs.

National Scouting Combine website describes the event as the “ultimate four-day job interview.” It is a key step in a player’s journey to the NFL. Players get the chance to impress scouts on and off the field, make their case to be drafted — and, if they’re lucky, live out their dream of playing in the NFL. 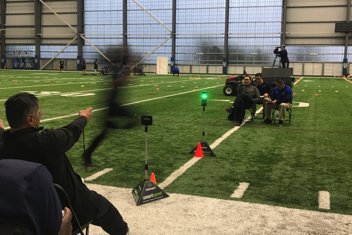