This year, as in every year since the Harris Poll began asking about it in 1985, Americans who follow at least one sport say that pro football is their favorite — and television has played a key role in building the NFL’s popularity.

NBC’s “Sunday Night Football” averaged 21.3 million viewers in 2014 and has been prime time’s top-rated show for the full September-May TV season for four consecutive years — a first for a sports series.

Here are some of the highlights of the 2015 NFL broadcasting schedule: 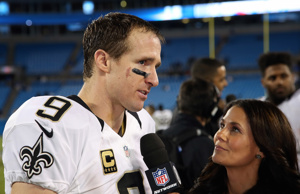 A look at the NFL’s broadcast partners in 2015

What are you going to see this season on each network that broadcasts NFL games? Take a look:

Super Bowl 50, on Feb. 7, is the highlight of CBS’s 56th year of broadcasting NFL games. It’s also the 19th Super Bowl on CBS — the most of any network.

For the second year, CBS and the NFL Network will team up for 16 “Thursday Night Football” games beginning on Sept. 17, when Denver visits Kansas City, and showcasing division rivalries in 13 of the 16 games. Thursday night games will air on both networks in weeks 2–8 and week 13. The NFL Network will air games on Thursday nights in weeks 9, 10 and 11 and weeks 14, 15 and 16, as well as two Saturday games on Dec. 19 and 26. These games will be simulcast on over-the-air stations in the primary markets of the participating teams.

“Monday Night Football” kicks off its 46th season with a prime-time doubleheader on ESPN: Philadelphia at Atlanta (7:10 p.m. ET) and San Francisco at Minnesota (10:20 p.m. ET). Other highlights include a week 11 matchup between the Super Bowl champion Patriots and division rival Buffalo Bills (Nov. 23) and the 17th “Monday Night Football” game featuring the Dallas Cowboys and the Washington Redskins (Dec. 7).

SUPER BOWL IS ON THE FIFTY

The NFL is celebrating its premier event with “Super Bowl on the Fifty,” honoring the prestige and the history of the championship game, leading up to Super Bowl 50 on Sunday, Feb. 7, at Levi’s Stadium in Santa Clara, California.

CBS will televise Super Bowl 50 — its 19th Super Bowl broadcast, the most by any network.

“CBS Sports is proud to have made history televising Super Bowl I, and we are poised to do it again with the broadcast of Super Bowl 50,” says Sean McManus, chairman of CBS Sports. “This is a special season for CBS Sports, with more NFL coverage than ever before, including ‘Thursday Night Football,’ Sunday afternoon football, the AFC playoffs — and culminating with the biggest event in television history, Super Bowl 50.”

To make sure the best matchups at the end of the season are broadcast to the largest audiences, the NFL introduced “flexible scheduling” in 2006. This involves moving a game from its scheduled Sunday afternoon slot on CBS or Fox to the prime-time hours of NBC’s “Sunday Night Football.”

The NFL consults with CBS, Fox and NBC to determine which games will be flexed, and the league reserves the right to move the start times of Sunday games as long as it provides the teams affected and ticket-holding fans with 12 days’ notice. In week 17, the league can flex a game with playoff implications with only six days’ notice.

In week 17 of the 2014 season, the game between the Cincinnati Bengals and the Pittsburgh Steelers, which had playoff implications, was moved from Sunday afternoon on CBS to Sunday night on NBC.

Flex scheduling does not apply to Thursday, Monday or the occasional Saturday games. The NFL always has had the ability to move Sunday afternoon games between the 1:05 p.m. ET and the 4:05 p.m. ET or 4:25 p.m. ET time slots.

In 2014 the league introduced “cross-flexing,” which allows up to seven games annually that would have typically aired on Fox or CBS to be aired on the other network. That means, for example, that an all-AFC matchup could air on Fox and an all-NFC game could appear on CBS. An equal number of games must be cross-flexed: If CBS airs three games originally slated for Fox, then Fox would have to get three games that would have originally aired on CBS.