College all-star games not only allow NFL teams to assess whether players are ready for the NFL, they allow coaches to showcase their talent as well.

The NFL’s partnership with the East-West Shrine Bowl helps develop the next generation of head coaches. NFL teams select deserving assistant coaches who get the opportunity to show off their skills in the week before and during the game.

The NFL provides the coaching staff and game officials for the annual East-West Shrine Bowl, the nation’s first college all-star football game. In addition, NFL Legends serve as mentors to the Shrine Bowl players and coaches throughout the week.

“The East-West Shrine Bowl is not only a showcase for tremendous athletes who have a dream of playing at the next level, it is also a venue for upwardly mobile coaches in the NFL,” said NFL Executive Vice President of Football Operations Troy Vincent. “This is an opportunity to further develop, evaluate and showcase our assistant coaches who may be our next generation of head coaches.”

At the end of the NFL regular season, teams nominate assistant coaches who are:

A panel of NFL Football Operations staff, East-West Shrine Bowl leadership and two members of the NFL’s General Managers Advisory Committee reviews and selects the game’s head coaches, who fill their 12-person staffs from among the remaining nominated assistant coaches.

On average, more than 300 East-West Shrine Bowl alumni are on NFL rosters each year.

“The relationship between the East-West Shrine Bowl and the NFL is key to the growth of our game, not only for the hundreds of student-athletes who move on to professional careers, but also to highlight the professional development for coaches, referees, and player personnel staff as they rise through the NFL ranks,” said Bob Roller, executive director of the East-West Shrine Bowl.

Not only is the East-West Shrine Bowl an opportunity to showcase top collegiate talent, but it also provides the NFL with an exhibition to test new technology and potential rule changes.

Although the 2021 East-West Shrine Bowl did not take place in person, student-athletes participated in virtual training and coaching drills with NFL coaches and members of the NFL Operations staff.

“More than 100 of our selected players participated over the two days and were able to hear real-world advice from NFL Legends and current players,” said Bob Roller, executive director of the East-West Shrine Bowl. “Shriners Hospitals for Children is very grateful to all who gave their time to support our efforts. As always, players also learned more about Shriners Hospitals for Children and how, by supporting organizations like ours, they can impact the world outside of sports.”

In addition, the coaches nominated to attend by their general managers participated in virtual sessions with Marvin Lewis, Jim Caldwell, and Scott Pioli on ways to advance their NFL careers.

Identifying and developing the next generation of diverse leaders in football

As part of the NFL’s commitment to identifying and developing diversity in football, the East-West Shrine Bowl provides the next generation of leaders opportunities to continue their growth and advance their careers.

The NFL Experienceship program connects, develops and assists candidates from Historically Black Colleges and Universities (HBCUs) who are interested in careers in football operations with opportunities to learn the business through practical learning and shadowing experiences.

The East-West Shrine Bowl provides opportunities for women to earn hands-on experience with roles supporting the athletic trainers, equipment managers and video operations teams. The East-West Shrine Bowl is just one of the ways women are gaining experience with careers in football. Over the past five years, more than 140 women have earned opportunities in the NFL, CFL and college football through the NFL Women’s Careers in Football Forum. 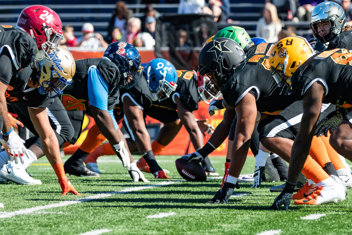