“Officiate every game and every play of every game as if it is an NFL interview because you never know who may be watching.”

Of the thousands of football officials nationwide, only 121 with the experience, technical skills, athleticism, and character to call the game at its highest level currently officiate in the National Football League. To ensure they always have the most qualified officials prepared to join the NFL, scouts across the country evaluate officials at all levels of football to identify potential NFL officials. The league then uses this prospect pool to develop and choose their next officials.

As these candidates, men and women, continue to officiate games, the scouts monitor their progress, act as mentors, and help the candidates advance through the officiating ranks. 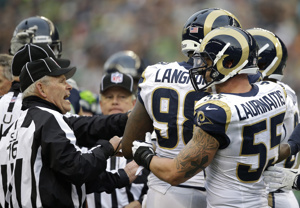 As the NFL Officiating Department’s recruiting and scouting coordinator — a position he assumed after a lengthy career as an NFL Side Judge — David Wyant plays a large role in deciding who becomes an NFL official.

Wyant has been officiating football for 50 years, including spending 23 years as an NFL Side Judge from 1991-2013. During his NFL career, he officiated in Super Bowl XLVIII, two conference championships, two Pro Bowls and 14 playoff games. He also has been a basketball official for more than 45 years, a lacrosse official for more than 30 years, and a baseball umpire for more than ten years, going on to work at the NCAA level in all three sports. In 2014, he helped train Side Judges for the NFL.

A graduate of the University of Virginia with his Bachelor of Science and Master of Science in Civil Engineering, Wyant played baseball and helped start and coached the women’s softball team in 1980. David spent 30 years researching and developing solutions to transportation issues in Virginia and other states.

Wyant worked for 30 years researching and developing solutions for transportation issues in Virginia and other states. He has served on committees for the National Academy of Science and the American Society of Testing and Materials, published more than 40 papers on his research and presented at international transportation conventions.

Wyant and his wife, Gail, live in Crozet, VA and have 3 children and 4 grandchildren. In 2014, he was inducted into the Albemarle High School Alumni Association Hall of Fame.

The Officiating Department’s scouting team — led by Wayne Mackie, VP of officiating, and David Wyant, head of officiating recruiting and scouting — is essential to the League’s commitment to identifying and developing prospects who may one day become NFL officials. With more than 30 years of NFL officiating experience combined, Mackie and Wyant lead the training and evaluation of over 65 national scouts from 31 different states.

Scouts look for officials with great potential by attending more than 500 games each season at various levels, though the primary focus is on college games. The NFL Officiating Department staff themselves attend about 50 games a season, including those that feature the League’s ODP prospects, including the post-season college all-star games. 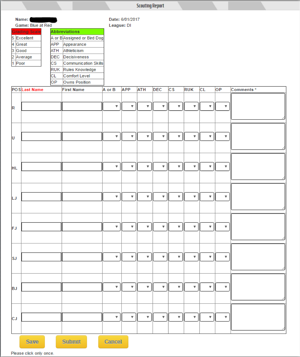 NFL officiating scouts have a lot in common with NFL player scouts; both meticulously evaluate individuals for their NFL potential. Officiating scouts record every aspect of every call — including missed calls — in a standardized online reporting system to rank officiating prospects. Here’s an example of a scout’s detailed evaluation and grading system:

With their extensive knowledge of football officiating and training from the NFL Officiating Department, scouts mainly use two methods to find the next generation of officials to add to the database: “bird-dogging” and word-of-mouth scouting.

A scout “bird-dogs” high school and college football games — meaning that, with no existing knowledge of the officials in that game, the scout shows up to evaluate the officials. Not every game features an official who catches a scout’s eye, but occasionally one stands out.

If an official makes a positive impression while working a game at which an NFL scout is present, the scout will notify the NFL Officiating Department to add that official to the officiating database.

Scouts and the NFL Officiating Department also rely on word-of-mouth, working closely with local, state, and college associations, as well as other officials to hear about standouts they should observe. Scouts tap their officiating networks to identify and follow prospects, but that doesn’t limit their focus to just that official. Occasionally, another crew member stands out and ends up on that scout’s radar.

During games, scouts comment on each game official’s performance, using a standardized form, for the benefit of NFL Officiating Department.

The current pool of officiating candidates is comprised of high school and college officials, and includes former NFL players, graduates of the NFL’s Football Officiating Academy, and women working to become officials. All of the officials have been evaluated to some extent and once in the database, continue to have their progress tracked by the NFL Officiating Department staff.

NFL officiating scouts are trained to recognize the distinct qualities that separate NFL-quality officials from the rest. Scouts look for officials who exhibit the following traits during every play of a game: 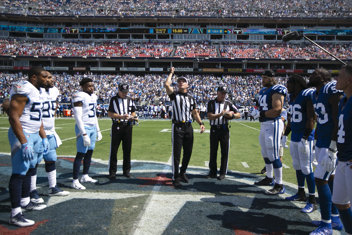