The NFL partners with the Senior Bowl to give NFL Draft prospects the opportunity to work with professional coaching staffs.

The league provides two full coaching, training, video and equipment staffs, as well as Legends Captains to support the game. This year, NFL head coaches Zac Taylor of the Cincinnati Bengals and Matt Patricia of the Detroit Lions will lead the 2020 Senior Bowl teams. NFL Legends Tony Richardson, Mike Rucker will represent the North as Legends Captains, while Torry Holt and Aeneas Williams will represent the South.

30 percent of the NFL is composed of Senior Bowl alumni 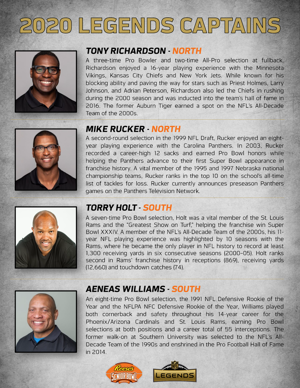 “The Reese’s Senior Bowl is very appreciative of the longstanding relationship it enjoys with the National Football League and we take pride in the fact that the Senior Bowl being played in Mobile, Alabama is one of the NFL’s greatest traditions. Last year, we credentialed over 900 club personnel from all 32 teams. As someone that scouted in the league for almost two decades, I know that coaches and scouts look forward to their annual visit to Mobile,” said Senior Bowl Executive Director Jim Nagy.

Played under Pro Bowl rules, the Senior Bowl is a national showcase for top NFL prospects who have completed their college eligibility. There are approximately 500 Senior Bowl alumni on current NFL rosters.

In the 71-year history of the game, the Senior Bowl has featured 53 Pro Football Hall of Fame members, including Joe Namath, Joe Greene, Walter Payton and Dan Marino. Current players such as Aaron Donald, Von Miller, Bobby Wagner, Carson Wentz and Russell Wilson have participated. In 2019, the Senior Bowl showcased 93 total players that went on to be drafted, including 10 first-round picks and 40 in the first three rounds.

Produced by the non-profit Mobile Arts and Sports Association, the annual all-star game is involved in numerous charitable events in the Mobile community, including player visits to local schools and children’s hospitals during game week and youth football events throughout the year.

The Senior Bowl has two programs that support NFL players and the community. The Senior Bowl Ambassador Club is a network of NFL and Senior Bowl alumni from the Mobile area. With over 60 members, including 18 active NFL players, the program supports philanthropic endeavors throughout the year. The Senior Bowl Scout School, comprised of current and former players, promotes the hiring of NFL Legends and minorities in scouting. 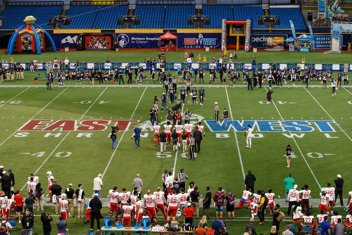